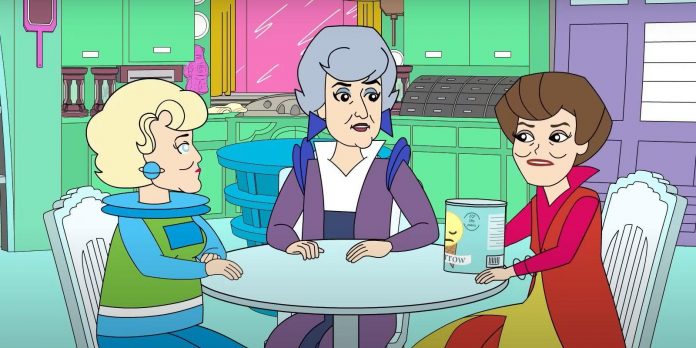 “Golden Girls” gets a Jetsons-style twist in an unexpected animated episode from “Bojack Horse” director Mike Hollingsworth. The Golden Girls aired from 1985 to 1992, and starred Betty White, Bea Arthur, Rue McClanahan and Estelle Getty as four elderly women living together in Miami. Often considered one of the most beloved sitcoms of all time, the series won numerous awards during its run and sparked a series of sequels and two spin-offs. Nevertheless, The Golden Girls have always remained the most successful of all.
In fact, The Golden Girls remain popular to this day. His legacy lives far beyond the show itself, perhaps in part because it further solidified the acting career of White, who sadly passed away in December. Unexpectedly showing how the series lives, this month The Golden Girls will get their own pop-up restaurant in Beverly Hills. In addition, Hollingsworth found a creative way to reinvent his favorite sitcom.
Related: Full House’s Golden Girls Copy Plan is Perfect for the Next Spin-off
Hollingsworth made “Golden Girls” both animated and futuristic with the help of a new pilot. The episode is titled “Golden Girls 3033,” according to a preview posted by IndieWire. In the pilot, the four main women, now animated, are still living in the same house 100 years later. Except that right now their house is populated with high-tech gadgets that look right out of The Jetsons, including a freezer/refrigerator that can deliver treats like “Dessert for One without a Date” or “Lasagna for a Single Lady.” button. Also, Stan from Golden Girls is now a rambling alien. The episode creatively combines the original sound from The Golden Girls with new animation. Watch the clip below:
Click here to view the YouTube video
The gadgets featured in “Golden Girls 3033” certainly resemble The Jetsons, but the animation style has since been significantly updated. Although the animation is not identical to BoJack’s style, Hollingsworth and his team create footage that bears some resemblance to the popular animated show. Using the real sound from The Golden Girls, an animated episode can bring back the original characters in some way, albeit in a new context and with some creative freedoms, such as in the case of Stan’s alien character.
While Hollingsworth’s unique pilot is certainly intriguing, it remains to be seen whether any longer version of “Golden Girls 3033” can be realized. Hollingsworth really created this with the intention of getting a serial order. This look certainly seems like a new way to evoke nostalgia for those who appreciated the “Golden Girls” during their show. However, will the “Golden Girls 3033” be able to keep the attention in a multi-part show? The popularity of this pilot should determine whether Hollingsworth gets the opportunity to develop this inventive idea.