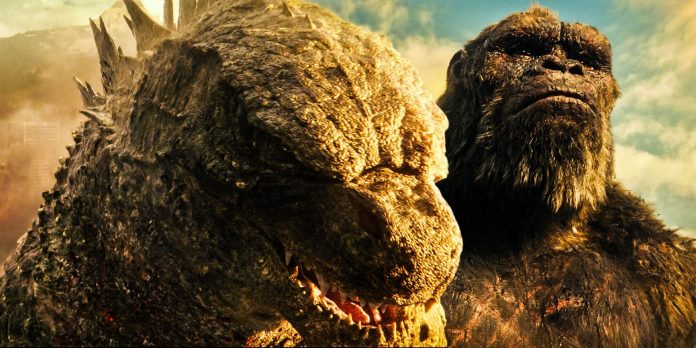 Godzilla vs Kong 2 can do what Godzilla vs Kong couldn’t, which will put an end to the rivalry between the two alpha Titans. Godzilla vs. Kong fulfilled its biggest promise by resolving the classic Godzilla vs. King Kong debate. However, this does not mean that the two monsters have finished fighting.

In a fierce battle, Godzilla staged a bestial demonstration, crushing Kong and defeating his rival. Godzilla vs Kong continued his victory with a joint game between them against Mechagodzilla. After the defeat of Mechagodzilla at the hands of Kong, the monkey dropped the axe, which was perceived as an act of submission to Godzilla. As a result, the two were able to get away from each other without further bloodshed. Kong is now the king of the hidden world of Hollow Earth, which allows both Titans to serve as alphas in the MonsterVerse without interfering with each other. At the same time, they have a chance to exchange blows once again. The next Legendary MonsterVerse movie is described as a sequel to Godzilla vs. Kong, which increases the likelihood of a rematch.

A rematch between Godzilla and Kong is possible, especially since the first crossover movie didn’t quite solve their problems. It’s true that they were able to disperse peacefully, but at least one of the two Titans still has a reason to fight. Godzilla is most likely pleased with his undisputed victory, since he managed to prove his superiority, but the same cannot be said about Kong. After all, Kong had just suffered a crushing defeat. Given his fighting spirit, it makes sense that Kong’s decision not to resume their fight was motivated primarily by his wounds and fatigue, rather than this idea that Godzilla is a superior Titan. Kong may lose again (and under different circumstances) before their rivalry really ends.

If recent rumors about “Godzilla vs. Kong 2” are true, the film may offer a different kind of battle between the two Titans, which could be the last chapter of their MonsterVerse rivalry. Presumably, the sequel will tell its own story, “Son of Kong”, from which it follows that Kong will find survivors of his kind. If this happens, he will have an army that he can use to fight Godzilla, which may or may not be joined by his titan minion from Godzilla: King of Monsters. If Kong loses this battle too, Kong may have no choice but to accept Godzilla as the alpha of all Titans.

It’s worth noting that Kong’s rivalry with Godzilla is now more than just their beef in the movie. There is also the question of what Kong learned about his ancestors in Godzilla vs. Kong. By this time, there is a good chance that Kong has come to the conclusion that in some sense Godzilla is responsible for his entire situation and the destruction of his species. The fact that the Congas moved from Hollow Earth to Skull Island is a sign that they were driven out by Godzilla and possibly other members of his species. If this hadn’t happened, they could still thrive in their Hollow Earth home, rather than being on the verge of extinction due to Crawling Skulls. Knowing this may push Kong to start a real war with Godzilla in Godzilla vs. Kong 2.