Home Entertainment God of War: Tyr from Ragnarok may be proof that there will... 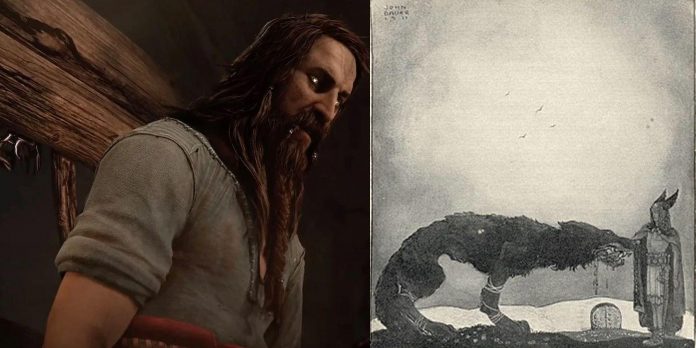 God of War: Ragnarok is a highly anticipated game, and fans around the world are eager for a chance to play what will be the last title in the Scandinavian God of War saga. The previous title made God of War: Ragnarok a great ending with confirmed legendary characters like Thor and Odin, and theories circulating on the internet discussing how Kratos and Atreus will be able to defeat the remaining aces. One of the most popular theories is that Fenrir, the wolf who swallows and kills Odin during the events of Ragnarok, will help fans in the battle with Asgard.

Unfortunately for all fans hoping that Fenrir will appear in God of War: Ragnarok, there is one important detail from Tyr’s disclosure that probably means that the great wolf will not be in the upcoming game. Both Tyr and Fenrir were major figures in the events of Ragnarok, and their presence during these events was strongly intertwined. After this discovery, many fans are now wondering how the game will cope with Odin’s death and what Kratos and Atreus will need to do to defeat the King of the Gods.

RELATED TO: God of War: Full Knowledge of Kratos’ Most Iconic Weapon

Why there may not be a Fenrir in God of War: Ragnarok

Before the events of Ragnarok, Fenrir was deceived by the gods and bound by unbreakable chains and in anger swallowed one of Tyr’s hands. So, after seeing the image of the Shooting Gallery in the trailer of God of War: Ragnarok, it’s easy to make sure that Fenrir does not exist in this universe yet. In addition, Fenrir is one of Loki and Angrboda’s three children, and one of his siblings, Ermungand, has already featured in God of War 2018. This probably means that Fenrir will not be Loki and Angrboda’s child in the games, and since Tyr still has both of his hands, Fenrir may not even exist in the game’s universe.

However, just as Jormungand exists in the game’s universe, it may make sense that Fenrir also exists and is not yet trapped. However, the games are very different from the typical events presented in Scandinavian mythology. As in the Greek saga, Kratos is likely to be the one to kill Odin, and having Fenrir kill a character who would be considered the Zeus of this saga would be both disappointing and anti-climactic. So, although Fenrir played a very important role in the events of Rangarok, he may not appear in God of War: Ragnarok.

How God of War: Ragnarok Can Introduce Fenrir

Kratos and Atreus will need much more help to defeat Thor and Odin. Although Tyr may be one of these characters, the introduction of Angrboda may lead to the inclusion of Fenrir in the games. Angrboda is an important discovery not only because of her relationship with Loki, but also because she may be proof that some giants may still be alive. Angrboda can help Atreus understand his Jotun powers, and together the pair can create a Fenrir using some form of magic to help them when they plan to attack Odin.

There are also many interpretations of the Prose Edda, which describes the events of Ragnarok, and one of them is that Fenrir was divided into two great hounds that already figured in the game. In this theory, Fenrir is divided into Skoll and Hati, wolves chasing the sun and moon, the event marking the beginning of Ragnarok, and what Atreus has already explained in God of War 2018. In the game, after the wolves have swallowed the sun and moon, they can merge back together and release Fenrir into Asgard to help Kratos and even form a bond with Atreus.

RELATED: 5 Mythical Weapons that Kratos Must Own in the sequel God of War: Ragnarok

What could Fenrir’s exclusion mean?

Obviously, Fenrir is an important figure in the events of Ragnarok and probably the only creature that can compete with Odin, which makes fans wonder how Kratos will be able to fight the King of the Gods. Although Kratos constantly demonstrated that he was more than capable of defeating the gods, he always needed something special to deal with some heavy fighters, such as the Blade of Olympus that killed Zeus. So, since it is likely that Fenrir will not be in the game, Kratos will need to find a weapon that could kill Odin, or a force that could help him weaken the Scandinavian god.

There are many legendary Scandinavian weapons that Kratos could use to help with this, along with the help of his potential allies Tyr and Angrboda. Kratos may have to use one of the weapons of the remaining Norse gods to kill Odin, however, another result is that Kratos can spare Odin. In the first game, Kratos warns Atreus that killing a god is never a good thing, and this could lead to a symbolic ending to the Scandinavian God of War saga.

As God of War: Ragnarok is supposed to put an end to the Scandinavian saga, fans are looking forward to answers to all their questions. Although it is more likely that Kratos will be the one to kill Odin, the game has the option to include events from the Prosaic Edda and add the Fenrir function to the game. Anyway, God of War: Ragnarok

Dungeons & Dragons: Hugh Grant will be the villain