Home Entertainment God of War Ragnarok: what could be the role of Fenrir in... 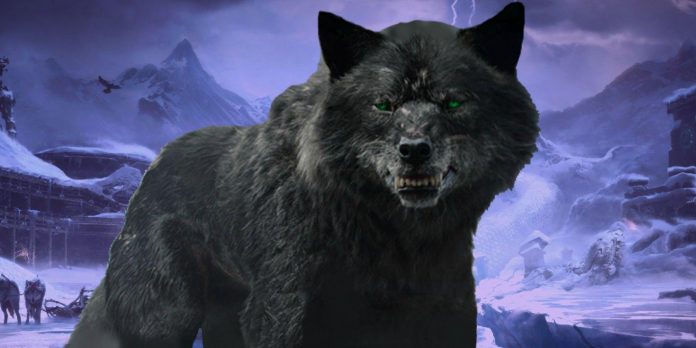 Even though hype for God of War Ragnarok has been high, there’s been a noticeable shift in its fan base online more recently. Now that players know Kratos and Atreus’ final Norse mythology-themed adventure is only a few months away, the anticipation surrounding the game feels more palpable. With its November 9 release date, the situation is only likely to ratchet up from here.

In a lot of ways, Santa Monica Studio’s announcement has understandably opened the floodgates when it comes to hype and speculation. The accompanying trailer that was released to commemorate God of War Ragnarok peeled back the curtain on the themes and entities players can look forward to encountering. One character reveal that was impossible to miss, though, was the appearance of Fenrir.

RELATED: 5 Burning Questions We Still Have About God of War Ragnarok

Throughout the God of War series’ history, Santa Monica Studio hasn’t always strived for complete mythological accuracy. From a plot perspective, the studio has taken inspiration from the real world’s ancient religions in ways that have allowed it to avoid getting too bogged down in them. Instead of adapting stories beat-for-beat, Kratos has been allowed to walk through Greek and Norse mythology along a path that’s often felt more like a homage. It’s for this reason that fans should be cautious looking for answers to the Fenrir conundrum, in the pages of the old Norse religion.

With all of that being said, it stands to reason that Fenrir’s role within God of War Ragnarok won’t be completely detached from the stories of Norse mythology. Historically, character origins and designs have been the most mythologically accurate part of the studio’s design philosophy. It’s worth keeping in mind then that in most iterations of the pantheon, Fenrir is said to be one of the sons of Loki and Angrboda. Thanks to the revelations at the end of God of War 2018 that Atreus and the god of mischief are seemingly one and the same, it’s possible that Fenrir will play an important part when it comes to his character development.

Due to Angrboda’s presence within Ragnarok, there’s a chance that players could get to see how Fenrir comes into existence, presumably either through magic or some time-travel shenanigans. Getting to that point in the story will likely drive the game’s opening hours along. Beyond being an invisible influence though, Fenrir’s arrival could theoretically test Atreus’ resolve and motivations. Considering how father and son relationships have underpinned the franchise thematically, it stands to reason that Santa Monica Studio will give Fenrir a role that allows for another exploration of the topic.

One of the factors that defines Fenrir in most Norse mythology adaptations is the manner in which the giant wolf is treated by Asgard. Thanks to what ends up being a self-fulfilling prophecy, Odin chains up the beast out of fear for the role he’s expected to play in his death. If Santa Monica Studio decides to incorporate this concept into its own version of the character, there’s a decent chance that Fenrir will need to be saved by Kratos and Atreus in the story. In some respects, Fenrir’s role could be defined initially as an objective that players need to chase down as a result.

Beyond references that suggest Fenrir has already been imprisoned, there’s evidence that this journey could come to pass. Thanks to God of War Ragnarok’s 2021 PlayStation Showcase trailer, it’s been suggested that the duo will set out to find allies. Freeing Tyr specifically appears to be a significant part of this process. It’s worth keeping in mind as a result of this that, in mythology, the god of war has an interesting connection to Fenrir. Even though Tyr is said to have lost his hand whilst chaining him up, it’s often inferred that the pair have a deep friendly relationship. Being a vehicle for reconciliation could therefore be one of the roles that Fenrir embodies in-game.

Even though Fenrir is often depicted as a giant imposing beast, there’s evidence that the wolf’s role in God of War Ragnarok won’t be something that players will need to be afraid of. As the likely son of Atreus and the character said to be predestined to kill Odin, it would make the most sense for him to take up a supporting role next to his father and grandfather. Thanks to their familial connections and Thor’s genocide of his extended giant family, Fenrir has plenty of reasons to line up alongside Kratos and Atreus during the battles that are coming their way.

Although the pair are said to be determined to prevent Ragnarok from happening, it seems unlikely that Santa Monica Studio will pass up the chance to show the apocalypse going down on-screen. With Odin therefore likely to take up a role as one of God of War Ragnarok’s primary villains, Fenrir could end up engaging him in battle as his destiny demands. This wouldn’t necessarily prevent Kratos and the All-Father from engaging in one of the game’s most anticipated grudge matches either. Riding into battle on top of the wolf, before he possibly gets the final killing blow, would be a sight to savor.

Fenrir the Boss Battle in God of War Ragnarok

Based on God of War Ragnarok’s release date trailer, Santa Monica Studio appears to be keen for players to go into the game expecting Fenrir to be a villain. Based on the beast’s connections to the game’s protagonists, history, and destiny, this seems like a deliberate bait and switch. After all, Fenrir wouldn’t be the first time that the studio has revealed a giant monstrous character, only for it to be eventually revealed to be an ally in-game. Players only need to look at Fenrir’s brother, the World Serpent Jormungandr, for evidence of this in action.

In Norse mythology though, it’s worth keeping in mind that Fenrir is technically characterized as an antagonist. Due to the fact that the story is told from the perspective of the gods, the wolf is often blamed for the death of Norse mythology during Ragnarok. Santa Monica Studio could play into this with Fenrir’s role within its own story. Based on his past, it wouldn’t be completely far-fetched if he ultimately decides that all deities are a force to be feared regardless of their pantheon, past, or current allegiance. Considering the amount of blood Kratos has on his hands, in particular, it can be argued that he’s overdue a final reckoning.

In the run-up to God of War Ragnarok’s release, players have focused heavily on the franchise’s frequent use of patricide as well. Fenrir eventually taking up an antagonistic role in opposition to Kratos or Atreus would be in keeping with the cycles that Santa Monica Studio has enjoyed exploring. If this comes to pass, players could end up facing off against the wolf in one of the series’ legendary boss battles.

God of War Ragnarok is scheduled to release on 9 November 2022 on PS4 and PS5.