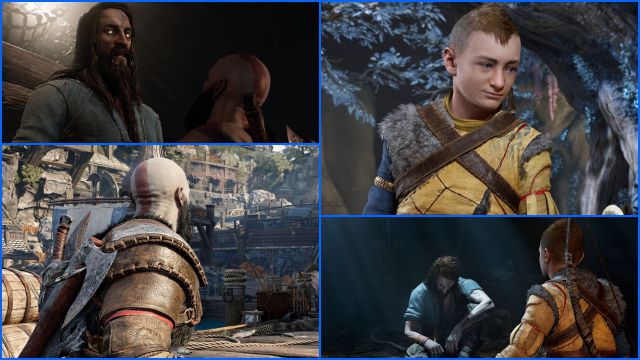 God of War: Ragnarok:  Sony’s game Santa Monica Studio updates its product page and shows us what the new Kratos and Atreus adventure will look like on PS5 and PS4. Sony Interactive Entertainment has updated the God of War: Ragnarok product page with new gameplay footage and story details. Although there are no sensitive aspects to be considered spoilers or plot spoilers, little by little we are becoming more clear about what awaits us at the plot level in this second and last installment of the Nordic saga, scheduled for the year 2022 on PlayStation 5 and PS4.

As we can see, the title shows us new images of characters such as Kratos, Atreus, Freya and Angrboda in some of the new settings that we will visit in this long-awaited outcome.

“Atreus seeks information to help him understand the ‘Loki’ prophecy and the role he will play in Ragnarök,” reads the fundamental premise of God of War: Ragnarok, which appeared as its first gameplay trailer at the PlayStation Showcase last September. . “Kratos must decide between submitting to the fear of repeating his mistakes or leaving the past behind and becoming the father Atreus needs.”

“His travels through the nine kingdoms will put Kratos’ deadly Spartan abilities to the test like never before in his fight to protect his family” with weapons of war such as Leviathan’s ax, Chaos Swords and the shield of Guardian. “As the threat of Ragnarök looms, Kratos and Atreus will have to choose between the safety of their family and that of the kingdoms …”.

God of War Ragnarok will arrive in 2022 on PS5 and PS4, but does not have a specific release window

This week we learned that the game will have a “surprising, but inevitable” ending. Eric Williams, its director, will finish the arc of the Nordic saga in this installment, so there will not be a trilogy based on the work initially published in 2018. “We want to create an experience that is worthy of the name of God of War,” he pointed out. , with a moving, epic story in which we see traditional situations between a father and a son; with which we can all empathize.

God of War: Ragnarok is scheduled to premiere sometime in 2022 on PS5 and PlayStation 4. The original 2018 installment will arrive on PC in January 2022.

Prey star Dakota Beevers talks about the decision made for the...