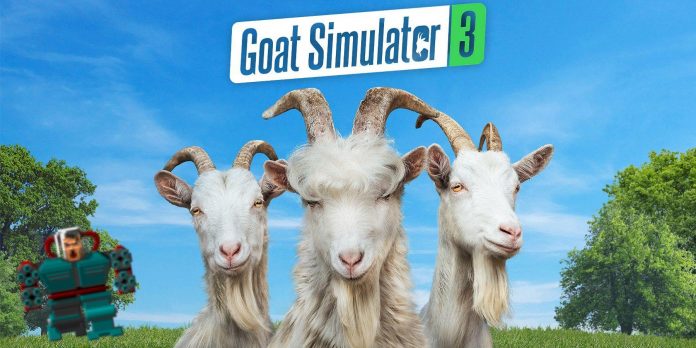 Goat Simulator 3 is the second part of silly goat games, which sounds a bit confusing, but obviously, this is the atmosphere that the developer Coffee Stain Studios seeks to perpetuate with this new game. Not only is humor everywhere, the game will also refer to other well-known releases. In the trailer for Summer Game Fest, ridiculing Dead Island 2, irreverence is very noticeable, and there is also a hint of the cult id Software series.

In a recent PCGamesN report, it seems that Goat Simulator 3 will have a segment that, in fact, is a reference to the classic 1992 shooter Wolfenstein 3D. Judging by the demo, the players will meet the old woman in the basement. At this point, the game will turn into a rectangular corridor and retro FPS style, in which the main character, a goat, will fight an evil grandmother who has turned into a boss. Although there is no footage from this section at the moment, it looks like it might resemble a fight between William “B.J.” Blazkovich and Mecha-Hitler, the final boss of the original game.

Wolfenstein 3D is one of the most iconic first—person shooters ever created, predating Doom. While Doomguy’s antics in 1993 helped popularize the genre, it was probably Wolfenstein who helped lay the groundwork for early FPS games. Although Goat Simulator is not from the first person, it is still a worthy tribute to this classic id Software game, and, no doubt, fans will enjoy it, if not for reasons of nostalgia.

Recently, the first gameplay trailer for Goat Simulator 3 was presented at Gamescom. Fans of the first part expect gratuitous stupidity from the IP address of Coffee Stain, and these new frames are no different. What’s interesting about this promising title is that it will have a cooperative mode, so this time a few goats can cause chaos.

When the first game was launched in 2014, released, of course, on April Fool’s Day, fans were very surprised by the fact that it was a deliberately bad and broken video game. Its wacky physics and the fact that the goal is to create as much senseless destruction as possible made it an indie hit. She became something of an instant success, and her parody of other game franchises became an additional cherry on the cake of ruminants.

Apple Wants You to Pay for Gas from the CarPlay Screen

ESO: High Isle — how to get a left-handed Aegis belt