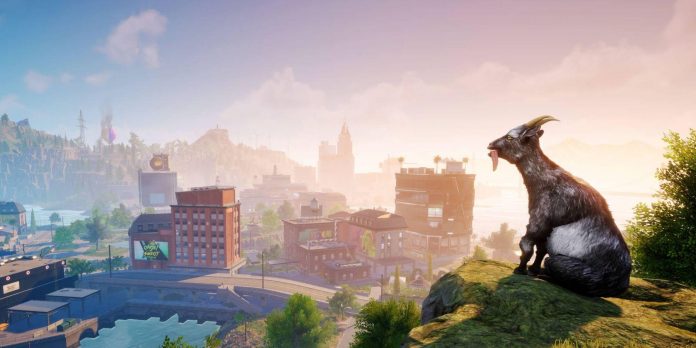 The new Goat Simulator 3 trailer doesn’t reveal anything new about the game. However, it’s as fun as it is disturbing. The trailer revolves around a large number of goats falling from the sky and an unhealthy number of close-ups of goat udders. Then these goats fall on the people living on Goat Simulator 3 island, and each of them is completely unaware of what awaits them. In this regard, the trailer is a clear message (or threat) to Goat Simulator fans. Watch out for the sky, because Goat Simulator 3 is on its way.

With the announcement of the release date of Goat Simulator 3, Coffee Stain has also opened up the possibility of pre-buying or pre-ordering the game on supported platforms. Since there will be Coffee Stain, of course, those who pre-order the game will receive an in-game “Pre-Udder” for free, which, according to Coffee Stain, “is exactly what you think.” The udder in the trailer should make it clear what players can expect with their pre-order.

It is also possible to pre-purchase a digital version of Goat Simulator 3 with a downgrade. It’s filled with what Coffee Stain describes as “random goat trash,” but what’s better described as DLC includes a lot of updated cosmetics and content from the original Goat Simulator. The DLC includes various Payday masks, MMO tank armor, space helmet and suit, as well as 3D printing files for Pilgor Goat, Tony Shark, Goat Tower and Keychain. The Digital Downgrade Edition costs $39.99, which is $10 more than the standard version.

Today’s announcement of the release date of Goat Simulator 3 takes place with almost no build-up. The game’s Twitter account shared just a few silly TikTok videos after Summer Game Fest. There are no other trailers on Coffee Stain’s YouTube channel. Fortunately, those who are interested in pre-ordering Goat Simulator 3 most likely already know what they want. Coffee Stain can spend the next few months convincing everyone else that acquiring Goat Simulator 3 is in their best interest.

Goat Simulator 3 is released on November 17 on PC, PS5 and Xbox Series X/S.

Elden Ring Player calculates the strength of a Fire Giant to...