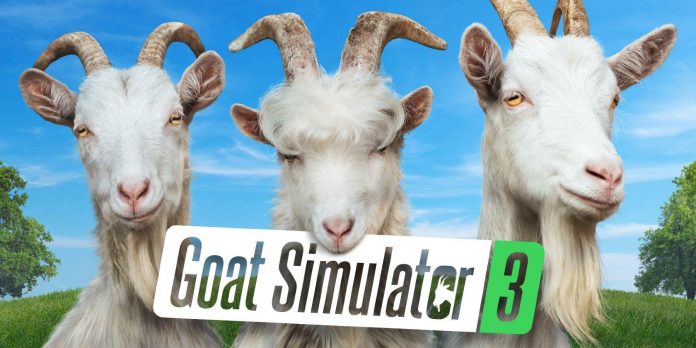 A lot can be said about video games that allow players to do what they want, when they want, with virtually no consequences. In Goat Simulator, players rush through different levels, destroying houses, licking everything that catches their eye, and headbutting everyone who stands in the way of the chosen goat, Pilgora. Goat Simulator 3 was unveiled at Gamescom 2022 along with an exciting trailer showcasing the best aspects of goat life.

In the traditional Goat Simulator fashion, there seems to be no end to the possible madness, as fans quickly see the various styles of goats available to choose from, with a wardrobe feature that includes shoes, hats and outfits. Then it is shown how Pilgor jumps through several different levels, sometimes with friends, and plays different games along the way. At the end of the trailer, it turns out that the game is available for “pre-udder” and should be released on November 17, 2022.

A picturesque, twisty camera tour of a bizarre farm turns into a close-up of a Pilgor goat that lets out a scream before the trailer begins, demonstrating what makes Goat Simulator such a strange simulation game, including a Pilgor swallowed by a whale and watching it. dance of the banana mascot. There are also a few mini-games teased, with something that looks like the floor is made of lava, with lots of tractor launches and even races with other goats. The trailer continues in the same vein, offering only a brief respite in the yoga studio, which is then immediately destroyed.

Even though there are new features and levels, some things remain the same between the two games: people in the Goat Simulator world keep their ragdoll-like way of flopping after getting in the way of Pilgor, following the intentionally terrible approach of Goat Simulator. to physics. Coffee Stain Studios has an outlandish point of view on how it wants its simulators to play, as evidenced by the sudden inclusion of a medieval setting in the Goat Simulator 3 trailer.

Given that no direct answer was given to the question of why Coffee Stain switched from Goat Simulator to Goat Simulator 3, completely skipping the sequel, it’s not surprising that the trailer was filled with wild improbabilities.