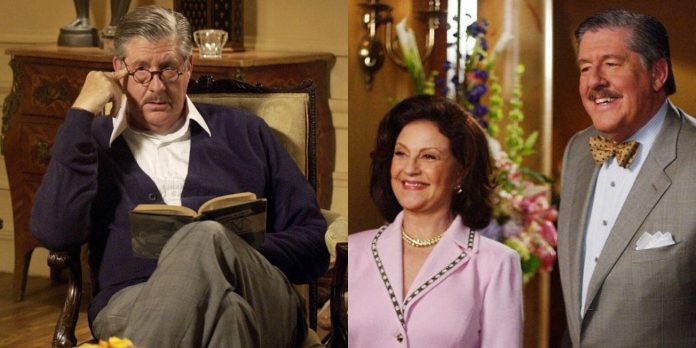 Gilmore Girls may not be a Netflix original show, but it has found a home on the streaming service, which aired its 2016 reunion special, A Year in the Life. Now a staple of the platform, fans of the show have loved revisiting Stars Hollow and its quirky inhabitants. Gilmore Girls remains a beloved jewel of the noughties, thanks to its fast-paced, pop culture-filled dialogue and unforgettable characters.

One of the most memorable is Richard Gilmore, the patriarch of the Gilmore clan. Stern, dependable, old-fashioned, and hard-working, Richard was unique among the show’s quirky ensemble. However, he also had a distinctive sense of humor, as evidenced by his most memorable and iconic quotes, which perfectly encapsulate his personality.

“Pilot” introduces Richard as somewhat aloof and uninterested in his family. However, nothing could be further from the truth. Richard cares deeply for his family but sometimes doesn’t know how to find common ground without attacking or putting them down.

His way of describing his work is the perfect example of this. He doesn’t know if Rory will be genuinely interested in the intricacies of his work and isn’t particularly interested in going at them either. In comparison, he goes more in-depth when he spends time alone with his granddaughter, but the interest comes from her. Richard wants to share more about himself with his family, and future episodes make this clear.

One of Gilmore Girls’ saddest episodes involves Richard having a heart attack. Lorelai, Rory, and Emily are all by his side, and Richard, fully aware of his mortality, tries to tell Emily about the arrangements necessary should something happen to him. In typical Emily fashion, she refuses to hear him and demands to “go first.” Smiling, Richard concedes.

Emily and Richard have a (mostly) stable dynamic throughout the show, with the latter happy to let his wife have her way. Richard is happy letting Emily be herself and is often okay with satisfying her demands. Seeing she wants to “go first” is just another day in their marriage, and it’s nice seeing Richard trying to please her even when sick.

“The Very Gilmore Name Was Being Attacked. I Will Not Stand For That.”

Family is extremely important to Richard. Because he is so old-fashioned, he also upholds traditional and perhaps outdated values, including honor and duty. When Christopher’s parents, Strobe and Francine, verbally attack Lorelai, Richard protects her and kicks them out of his house. He then reveals to Lorelai that he didn’t do it to protect her but rather the Gilmore name.

Richard and Lorelai have a complicated relationship. His conservative values prevent him from being fully proud of the woman she becomes, but he does admire her many achievements. However, despite their differences, she is still a member of his family, and reputation is everything to Richard. He will stand against anyone threatening his family, be it Strobe, Mitchum Huntzberger, or anyone else.

“When I Was Ten Years Old, I Knew Exactly Where I Wanted To Work.”

Richard Gilmore loves his job. When he learns his company plans to retire him, he feels terrible and lashes out at his family. Richard eventually realizes he doesn’t like not working and returns to business as an independent company before eventually going back to his original company.

RELATED: 9 Actors Who Played More Than One Role In Gilmore Girls

Unlike other characters in the show who never learn what they want or discover it throughout their journey, Richard always knows what he wants from his life: to feel useful. Indeed, Richard is great in the insurance business, but he could’ve easily gone into publishing or marketing; he was versatile and accomplished in many fields. However, he most definitely wanted to feel important and be part of a company.

“There Are Many Things In Life That We Don’t Like…”

“… but their benefits far outweigh the temporary discomforts we have to endure.” This important quote comes in response to Lorelai saying she doesn’t like grapefruit, no matter how beneficial it is. However, Richard vehemently disagrees with her thinking, delivering this line that could very well be his mantra.

Richard is all about duty and commitment. He will always do what’s appropriate, like eating grapefruit daily to stimulate the brain. Richard is the sort of man who will make sacrifices to do the “right” thing. And even if his idea of “right” seems taken out of the 1950s, his commitment is admirable nonetheless.

Like many men his age, Richard is a creature of habit. He wakes up every day at 5:30, puts on a nice suit — whether he’s working or not — and goes about his day. He doesn’t appreciate disruptions to his routine unless they come from his family. Richard is one of the smartest characters in Gilmore Girls, so it’s not unusual to see him reading a book or the newspaper. He spends most of his time in his study, doing many of the same things over and over.

Richard is quite stubborn and inflexible. He doesn’t like when things don’t go his way and actively tries to have others follow suit. Safety is important to him — he is an insurance man, after all — and a steady routine grants him some sense of control over his life.

“It’s Getting Late, So Either Shoot Us Or Go Away.”

In the Gilmore home, Richard adapts a “my house, my rules” mentality. He displays this need for control with everyone, including Lorelai, Rory, and on occasion, even Emily. Richard’s behavior even spreads to police officers. When neighbors complain about a domestic disturbance, Richard delivers this great quote to them, displaying his short temper and reluctance to be ordered around in his house.

Richard will go to great lengths to take charge and isn’t afraid of arguing to defend his point. He doesn’t get intimidated by anyone — except perhaps his mother. Two junior police officers trying to boss him around in his own home are no match for him.

“For Tonight, And Tonight Only, My Name Is Bill, And This Is Our Song.”

“Wedding Bell Blues” is one of the best episodes of Gilmore Girls, as Richard and Emily renew their vows and reaffirm their commitment to each other. During his toast, Richard recalls a story about his youth with Emily, and the two dance to Laura Nyro’s 1966 classic, also named “Wedding Bell Blues.”

Richard saying he’ll change his name for the night so that the song can serve as his and Emily’s theme is sweet in and of itself, but it also speaks to their dynamic as a couple. Emily can be high-maintenance, but Richard loves maintaining her.

Rory is Richard’s pride and joy. Although initially unsure of how to treat her, Rory’s wit, humor, and ambition eventually win his heart. Richard takes great pride in flaunting her many achievements to his friends and colleagues and is convinced of her potential. When she drops out of Yale, he initially supports her before realizing she has lost her way.

Richard sees Rory as the Gilmore clan’s future. While he loves his wife and is proud of Lorelai, neither compares to Rory in his eyes. Rory was going places; she’d put the Gilmore name high. And while her path gets derailed, she still has the potential to become the person Richard wants her to be.