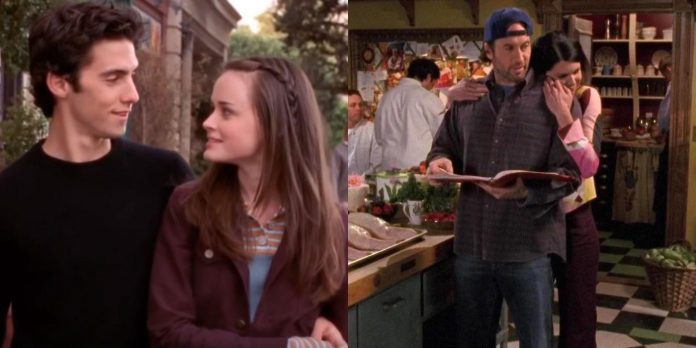 After ending in 2007, Gilmore Girls walked away with awards for TV Program of the Year (2007), an Emmy for Outstanding Makeup (2004), and multiple Teen Choice Awards. However, recently the creator of the series, Amy Sherman-Palladino, explained how the thought of Lauren Graham never winning an Emmy for her role as Lorelai Gilmore haunted her.

She told Vanity Fair, “It will always anger me that she didn’t at least get nominated and frankly just win because I just feel like they should just give her an award.” In the series, Lorelai spoke fast, loved hard, and learned a lot — especially in her relationship with Luke Danes. Interestingly, her daughter had a similar relationship with Luke’s nephew Jess, which brought similar parallels between both couples.

Did They Set Jess Up To Be Too Similar To Lorelai?

Based on Jess’ personality and contrasting personality to Rory, fans wondered if the writers set Jess up to be Rory’s version of Luke for Lorelai. What’s more, Jess also has similarities to Lorelai. Like Lorelai, Jess is spontaneous, quick on his feet, and never felt like he fit in.

Rory may have seen bits and pieces of her mother in Jess, which is why she felt drawn to him. This is especially true in the reboot where Jess is a source of stability and comfortability for Rory during hard times. In the reboot, Luke and Lorelai were in a great place in their romantic relationship, and Jess and Rory had never been better in their friendship. The reboot had incredible parallels between Rory and Lorelai’s love lives.

The Urge For Impulsivity

There were plenty of mistakes Lorelai made with Luke during their relationship. While Luke appreciated Lorelai’s impulsivity, he didn’t accept her ultimatum of getting married on a whim. Funny enough, this spontaneous behavior paralleled Rory and Jess.

Even though Rory and Jess weren’t dating and she was in a strange relationship with Dean, Jess showed up at her dorm room and begged her to run away with him. Like Luke with Lorelai, Rory was turned off by Jess’ pressure.

Lorelai and Rory had some of the worst Friday night dinners, thanks to their differences from Richard and Emily. Whenever one of the women started dating someone new, Richard and Emily demanded to meet them to see who would potentially be in the Gilmore family.

When Rory started dating Jess, she knew he would hate having dinner with her grandparents and the kind of life they lived — and she was right. Jess showed up late, had a black eye, and left the dinner early because he was so uncomfortable. Similarly, Lorelai didn’t want to bring Luke to her parents’ but they felt like they had no choice. Luke opted for a day of golf with Richard, which—much like Rory and Jess’ dinner—went horribly. The parallels between both meet-and-greets were not missed.

They Were Friends Before Becoming Romantic

What made Lorelai and Luke’s romantic relationship so successful was their decade-long friendship. Before they ever thought about being romantic, Luke and Lorelai were the equivalents of best friends. When they started dating, Lorelai was right in the fact that she and Luke would be endgame because of their foundation.

Jess and Rory weren’t as close of friends as Lorelai and Luke but they had an established friendship before they started dating. They were close enough friends, however, for Rory’s boyfriend Dean to sense the tension between them. Jess and Rory didn’t last as long as Luke and Lorelai, but what made their relationship strong at that time was their friendship foundation.

The Gilmore girls were social women. Although Rory got in trouble at Chilton for not being social enough, she had a core group of friends she relied on and enjoyed going out and doing things. Lorelai was far more social than Rory, but the two rubbed off on each other.

In Lorelai’s relationships, Luke was the one guy she got along with best, and part of that reason was because of their differences. In their relationship, opposites attract. But they weren’t alone. Just like Lorelai and Luke, Rory was also the more social one between her and Jess. When they were at a house party, Jess wanted to be anywhere other than that house, which was presumably how Luke would have acted if he was at a party with Lorelai. Both women were with salty men who preferred their own company.

Luke & Lorelai Both Felt Like They Failed Rory & Jess

This parallel revolves around Luke and Lorelai’s parenting of Rory and Jess. It didn’t happen often, but there were times when Lorelai felt like she was failing her daughter. Whether it was raising Rory in a shed before buying a home or wondering what she did wrong when Rory dropped out of Yale, Lorelai took the blame for Rory’s downfalls.

Luke wasn’t Jess’ dad but he was the best father figure Jess could have. When Jess moved in with Luke, Luke questioned his parenting skills whenever Jess made a mistake. Both Lorelai and Luke wanted Rory and Jess to stay in school but they had no choice but to sit back and wait when Rory and Jess had other plans.

Jess Is The Male Version Of Lorelai

Jess and Lorelai have small similarities in their personalities that went unnoticed. Jess was made out to be the bad guy of Stars Hollow but, realistically, he was just a teenager trying to find his way in the world after growing up in a tough situation.

Both he and Lorelai were rebels who went against their families. They both had sarcastic personalities that often landed them in trouble with those who didn’t understand them. More importantly, both Lorelai and Jess were smarter than people gave them credit for. These parallels affected both relationships with Rory and Luke.

Both Couples Snuck Away To See Each Other

One of the reasons why it took Luke and Lorelai so long to get married was because of their communication issues and stubbornness. When their relationship first started, they didn’t want Stars Hollow to know quite yet so they snuck away from Luke’s Diner to briefly talk and sneak another kiss.

Coincidentally, Jess and Rory also made up excuses to meet each other when they were crushing on each other. Rory would tell Dean she had homework to do when she was seeing Jess, and Jess made a food delivery run to see Rory when he knew she was home alone. Even though these couples were at different points in their lives, they paralleled each other’s behavior.

The art of a love triangle was popular with both couples. While each love triangle had great love interests, they were always dramatic and filled with tension.

Rory was in a toxic love triangle with Dean and Jess. When she dated Dean, she had a crush on Jess. And later when she dated Jess, her friendship with Dean became problematic for her relationship with Jess. But they weren’t the only ones. Lorelai was also in a tense love triangle with Luke and Christopher. Parallel-wise, Dean and Christopher were the girls’ original loves before they fell in love with Jess and Luke.

Luke & Lorelai Tried To Make The Best Out Of Poor Situations

Luke and Lorelai didn’t always have it easy as adults or guardians. Lorelai did the best that she could to give Rory a good life and education. Luke did the same thing when he became Jess’ guardian. Even though Luke lived in a studio apartment above his diner, he did everything he could to make it cozy for Jess (and later April).

Both Lorelai and Luke were sentimental about their homes and the memories they shared there. Likewise, Jess and Rory felt similarly. Jess was new to Stars Hollow but he appreciated the home Luke made for him, which was exactly how Rory felt about her home with Lorelai.

This is Wartales, A Tactical RPG By The Creators Of Evoland