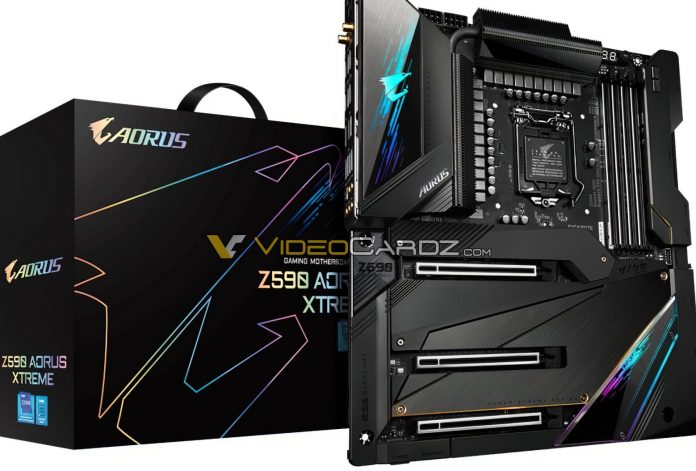 Rocket Lake-S will retain the same LGA 1200 socket design as Comet Lake-S, but Intel will still offer new chipsets including the Z590. That’s why motherboard manufacturers, including Gigabyte, will launch new products based on the Z590. One of them will be Gigabyte’s aforementioned motherboard.

What does the Gigabyte Z590 Aorus Xtreme offer?

According to Videocardz, Gigabyte will announce its 500-series motherboard lineup next week. This suggests that the motherboard may be introduced at the same time as Intel’s new Rocket Lake-S series, but some rumors say the chips will be released next March.

To mention the Z590 Aorus Xtreme, this special model uses a 20 + 1 phase power design instead of 16 + 1, unlike the Z490 Aorus Xtreme. It is also said that the motherboard will have powerful connectivity options including WiFi 6E, two LAN ports (2.5 GbE and 10 Gbe) and Thunderbolt 4.

We can see from the picture above that there are three enhanced PCIe x16 slots. However, three M.2 slots, two of which are Gen4, are also located on the motherboard to accommodate superfast PCIe 4.0 SSDs. On the audio side, it is said to be the first motherboard to use the unannounced Realtek ALC4080 codec.

There is no information on the price point yet, but one should not expect an affordable price from the Z590 Aorus Xtreme. Because its successor, Z490 Aorus Xtreme, is offered for sale in our country at 8 thousand lira band.