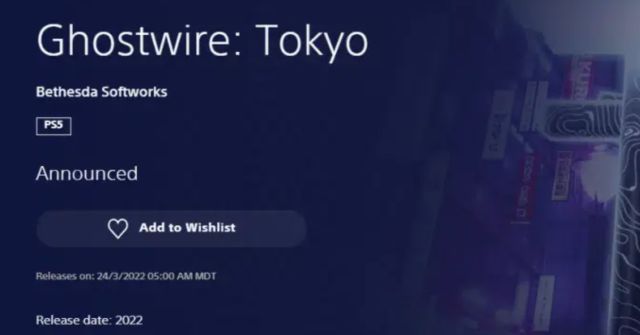 Ghostwire: The Australian digital store of the PlayStation Store advances the apparently official release date of the Tango Gameworks video game. Ghostwire: Tokyo has appeared dated March 24, 2022 on the official PS Store portal in Australia. The file for the new video game from Tango Gameworks, a temporary exclusive on Sony consoles, reflects this suggestive data in the face of the ever closer world premiere of the title, initially planned for 2021.

The information, which has spread at full speed in forums and social networks, is not official. However, at this time neither Sony Interactive Entertainment nor Tango Gameworks have confirmed or denied that information. If that is the expected launch date, it is expected that it will be formalized in the coming days or weeks given the proximity of the moment.

What is certain is that the record no longer reflects that date, March 24, but that reference has been withdrawn. Therefore, there are two possibilities: the first, that it was an involuntary leak before time; the second, that it is a simple mistake.

The question PS5 players are now asking themselves is whether or not they will play Ghostwire: Tokyo this March. The video game is already classified by the South Korean regulatory bodies, an added reason to think that its development has concluded and we are approaching the launch on PlayStation 5 and PC consoles, where it will also be released simultaneously.

On the other hand, it is possible that a new State of Play will take place in February in which not only will Horizon Forbidden West be given the prominence it deserves, which will arrive on PS5 and PS4 on February 18, 2022, but also to Ghostwire: Tokyo and other releases contemplated by Sony for this first third of 2022.

It should be noted that Sony published an article this week on its official website where it collects the 22 most outstanding video games for PS5 and PS4 for 2022. Names such as Stray (the cat game), Sifu, Little Devil Inside, Salt and Sacrifice appear in it. , Forspoken (March 3), and Ghostwire: Tokyo (undated).

Ghostwire: Tokyo will go on sale first on PS5 and PC. When the temporary exclusive ends (one year after the premiere) it can also be released on other platforms.