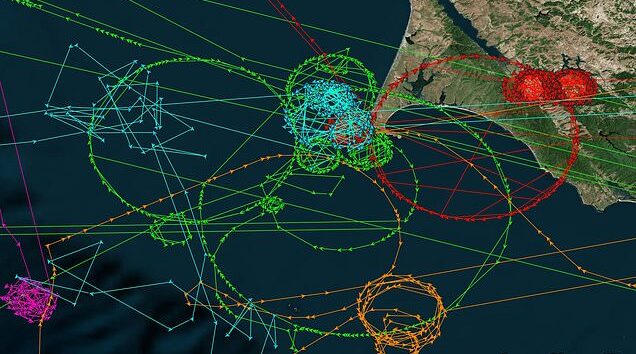 Bjorn Bergman, who worked in environmental observation organizations, encountered a few ships that were sailing off the coast of San Francisco on GPS, but there were no ships in the locations shown on GPS.

Bjorn Bergman, who works in two environmental observation organizations called SkyTruth and Global Fishing Watch, has encountered something quite mysterious recently. Bjorn came across some ships on the GPS, quite close to the San Francisco coast. Oddly enough, these ships weren’t actually there.

This event, called ‘ghost ships’, occurred when the signals sent by 9 ships that were not actually there appear on GPS. Each signal shown to be sent by a ship on GPS showed ships circling close to the shores of San Francisco. Some signals were even sent from land.

The ships were not actually there:

According to a report by Newsweek, these signals seen on the shores of San Francisco; It was recently spotted in Norway, Malaysia, Nigeria, the Azov Sea and the Suez Canal. So these ships were too far from the San Francisco coast when the signals were seen.

Today, all ships have to legally have an Automatic Identification System (AIS). Thanks to this system, the positions of the ships are known and thus any accident that may occur can be prevented. So what caused such an event to happen?

Todd Humphreys, a professor of aerospace engineering at the University of Texas, made a clearer comment on the subject. Todd claimed that the vessels whose signals were detected were using GPS deceptive devices, thereby deceiving the AIS system and hiding their real position. Todd continued his explanations as follows:

“We know it is caused by a GPS deceptive device because we can also see it in the training app data. In general, the wrongly positioned position is near the real position, but sometimes this position may be on the other end of the world. Like a ship in Africa appears in Point Reyes. ”

Although Todd Humphreys has made a very convincing claim and rationale in this regard, the source of the problem is still unknown at the moment, but the expert’s opinion is supported by many maritime organizations. According to some, these ships follow such a method to avoid oil sanctions.