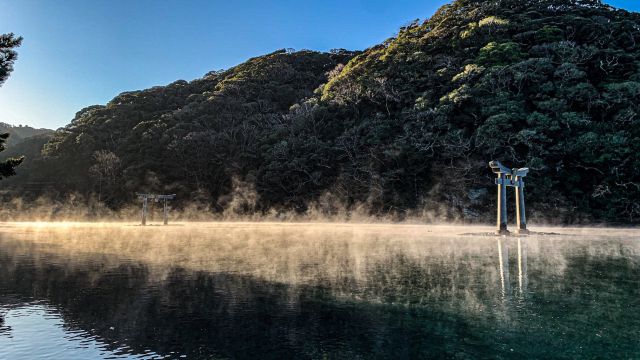 A crowdfunding campaign sought to repair a Torii Gate in one of the island’s shrines. Many Ghost of Tsushima fans helped out with their money.

Ghost of Tsushima has gone beyond the video game. Sucker Punch’s work served to map Tsushima Island, the real environment on which the Americans relied. Located in Nagasaki Prefecture, between Japan and South Korea, the area is regularly hit by typhoons. On September 7, 2020, one of them broke the “Heisei no Otorii” of the Watatsumi shrine, part of the symbols of the place.

Two months later, Yuichi Hirayama, priest of the shrine, launched a crowdfunding campaign in which he sought financial help to restore this Torii Gate. As of January 10, the priest completed the collection, far exceeding the initial goal. In total, they managed to accumulate more than 27 million yen, which is about 260,000 dollars, 540% of the goal that was requested. Among the more than 2000 people who have contributed, many of them were followers of the adventures of Jin Sakai.

“We have received a lot of support from the players of Ghost of Tsushima, a game that is based on Tsushima. I think it was God’s guidance, ”Hirayama said on the crowdfunding page. The Watatsumi Shrine is located in the central part of the island. As we knew shortly after its launch, Sucker Punch collaborated with a local tourism office. This relationship made it possible to transmit the real history of the island to those who did not know its history.

Hirayama also wanted to express his gratitude given the special situation we live in. “I am very grateful for the support of so many people during a life pressed by the coronavirus and the difficult economic situation,” he said. As a detail, those who donated more than 10,000 yen will be part of a memorial mural near the shrine.

For its part, Ghost of Tsushima is available exclusively for PS4. Given the new generation backward compatibility service, it is fully playable on PS5.

Pfizer and BioNTech create powder version of the vaccine

How to watch Netflix with someone else? Four extensions to use...