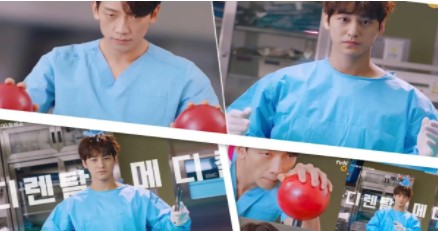 Very soon we will see Kim Bum and Rain together in a K-Drama full of fantasy, ‘Ghost Doctor‘ will entertain us with new adventures and its first teaser proves it.

Rain is one of the most loved and acclaimed South Korean artists in the Korean entertainment world, his long-awaited return to doramas is about to arrive with the new drama ‘Ghost Doctor‘, this fantasy production will bring great adventures for fans of the K-Dramas.

Next to Rain will be Kim Bum as co-star of ‘Ghost Doctor‘, this upcoming South Korean series will take place in a hospital, where two doctors are working completely opposite in terms of their personality; but something changes when one of them loses his life and both will be united by their souls.

Since the cast for this new fantasy drama was revealed, great expectations began to be created for this production that will unite great talents; The cast also features stars such as Son Na Eun, Seo Ji Young, and Yoon Da Kyung.

There is less and less time for us to see ‘Ghost Doctor‘ which will have a very funny story and will delight the public, its first teaser shows us why we should not miss this new K-Drama.

In the first preview of ‘Ghost Doctor‘ we can see how Cha Young Min, Rain’s character, controls the movements of Dr. Ko Seung Tak, Kim Bum’s character, with a funny spark and a robot dynamic that lets us see the funniest thing about this new story.

The chemistry between Rain and Kim Bum also seems pretty good and fun, we definitely can’t wait any longer to see this new drama.

When İs The Release Date Of Ghost Doctor?

The release date of ‘Ghost Doctor‘ is next January 3, 2022, there is still a month left, but surely, very soon we will have new advances that reveal more of its plot and hook us so as not to miss any of the episodes of this funny drama.

The countdown to see Ghost Doctor has begun, and Rain thrills with her return to South Korean television alongside this great drama.

Before the premiere of ‘Ghost Doctor‘, you can know Kim Bum’s career as an actor, he watches all his dramas and movies.