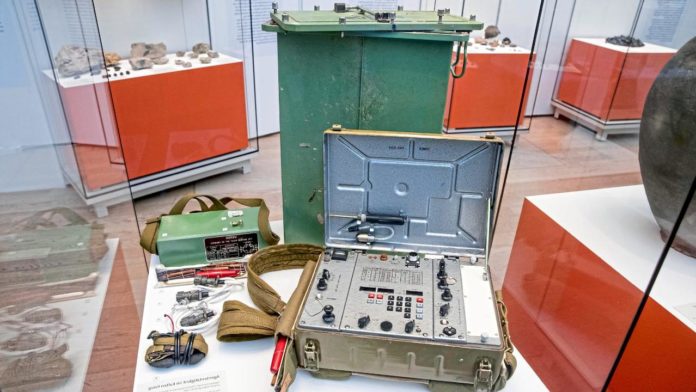 German archaeologists found a spy radio from the Second World War. This espionage radio, which belongs to Soviet Russia, was captured in a very good way, closed and buried. Experts announced that the espionage radio looked as if it had just left the factory.

The world has hosted dozens of great wars throughout history. One of these wars was World War II. The war that reshaped Europe was ended with Germany’s defeat. Now a special military device from those days has been seized. The embedded instrument was a secret spy radio from Soviet Russia.

German archaeologists came across this espionage radio when digging in ancient ruins near Cologne. The researchers’ main quests were Roman ruins, but the radio, which was embedded in a well-preserved way, changed the agenda of the experts.

Despite being buried years ago, it looks like a new spy radio
The radio, which was thought to have been buried by Soviet soldiers in Germany at that time, was found in an airtight box. The experts, who opened the box, which was closed with iron screws, found the spying radio, which looked as if it had just left the factory.

The experts, who made detailed reviews of the radio they found, explained that every part of this spying radio was wrapped in papers. The reason for this is not known exactly, but according to experts, the soldiers who brought this device at that time did not have the opportunity to use the radio, and therefore even the papers in production were not removed. Experts say that this radio will continue to work when new batteries are installed.

The radio found during an excavation by archaeologists is a model called “R-394KM”. Experts say that under normal circumstances, there should be Russian letters on this radio, but the radio they have captured has Latin letters. According to historians, the reason for this situation is the confusing tactics that Soviet Russia preferred at that time.

The spying radio found will be exhibited in the museum for a while. The radio, which the enthusiasts can go and visit, will be re-examined after the waiting in the museum, and the answers to the questions of how many years ago and why he was buried will be searched. Unfortunately, it is not possible to have detailed information about this spy radio, experts say.

Formula 1 Driver Lewis Hamilton Changes His Name! Here is the...