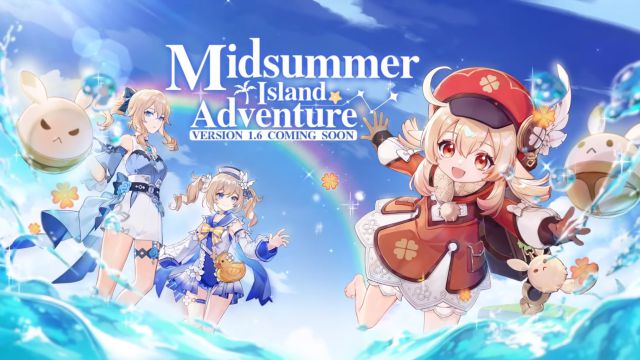 Genshin Impact: We leave you with the trailer and we have all the news that we know of the new version 1.6 of Genshin Impact, called Summer, islands, adventures! miHoYo continues to keep Genshin Impact active week after week. This May we were able to enjoy new events, characters and more in the title and now is the time when version 1.6 is approaching. We left behind a complete version 1.5 to receive the new great update of the title, which we will be able to install and enjoy as of June 9. Alternative costumes, a new character, archon missions, and even the promise of a series of summer island adventures. You can tell that summer is coming and it is also like that for Genshin Impact. We also remember that the version of the game for PS5 is already available.

All about the new version 1.6 of Genshin Impact

The alternative skins to the game are here: specifically, the first to land on Genshin Impact will be two summer outfits for Jean and Barbara.
The Adventure Season event focuses on the territory of Summer Island, a new area to explore for a limited time (at least that we know about, for now).
Inazuma’s First Playable Character – Kazuha – The game’s long-awaited new large area
New Archon Mission with clues on how to get to Inazuma: it seems that for now the access to this area will not arrive, but without a doubt the clues that version 1.6 leaves us suggest that very soon we will be able to walk through that exciting city.
More Inazuma Concept Arts – Something that reinforces the aforementioned idea.