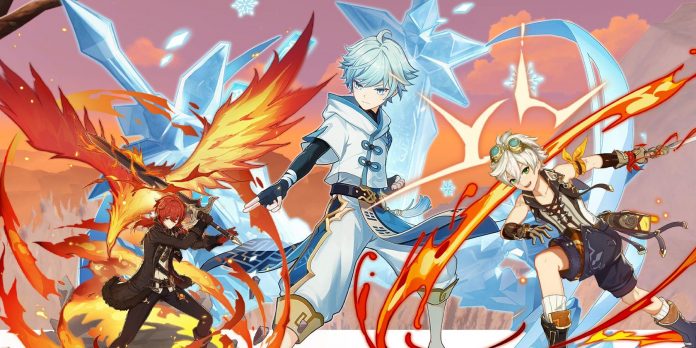 Chongyun is an underrated Cryo user in Genshin Impact. His downfall comes from his Elemental Skill, which disables many characters because it creates a Frosty Field that infuses Swords, Claymores, and Polearms with the Cryo element. While this is a major issue for characters like Keqing, for example, it is a blessing for others, like Diluc.

So in the end, Chongyun’s usefulness in Genshin Impact comes from what are the characters included in his team compositions. This is major because some of these characters help him shine as a Sub-DPS, while he fulfills all their needs as a Support.

This team composition heavily focuses on the synergy between Hu Tao and Xingqiu since they are considered to be one of the best pairs in Genshin Impact. When Xingqiu activates his Elemental Burst and Hu Tao follows with her Elemental Skill, they will constantly trigger Vaporize. Usually, Zhongli is included in this composition, but Diona is viable as well.

Diona can shield Hu Tao and heal her. Her C6 can also elevate their damage by adding 200 Elemental Mastery, which will amplify their Vaporize Reactions.

As for Chongyun, he is a key unit in this team composition. His C2 passive effect will lower all their Skills and Bursts by 15% inside his Frost Field, lowering Hu Tao’s off-field time.

Chongyun and Diona can also take part in the team’s Elemental Reactions by either freezing enemies or enabling Hu Tao to occasionally trigger Melt damage instead of Vaporize. Not to mention, his Crazy burst damage, especially after Hu Tao’s Elemental Skill duration is over.

Diluc’s mechanics are fun to play with, especially his one Normal Attack + one Skill combo. When paired with Chongyun, inside his Frost Field, Diluc’s Normal Attacks will be infused with Cryo and enable his Skill to trigger Melt. He will hit faster and have a lower cooldown on his already low cooldown skills and Bursts. He will simply shine as the Main DPS.

Now add to this combo another amazing pair like Kazuha and Bennett. When Kazuha casts his abilities after Bennett’s Burst, he will prioritize Bennett’s Pyro and infuse them with it. This will spread Pyro all over the battlefield, grants Diluc an insane Pyro buff, and lower enemies’ resistance to Pyro.

In addition, Inside Bennett’s field during Kazuha’s Burst, Chongyun can come out to deal some impressive Melt damage, slamming his Spirit Blades upon enemies before leaving the field for Diluc to trigger the entire process all over again.

Chongyun, Xiangling, Xingqiu, and Bennett, all are not good enough to take the Main DPS role. Instead, their team composition focuses more on the rotation between Cryo, Hydro, and Pyro.

Those three elements combined can only produce Melt and Vaporize Reactions. What makes this synergy work perfectly is their ability to deal surges of damage, amplified by their Elemental Reactions, repeatedly. Of course, Bennett should never trigger Melt or Vaporize. Rather, he should start the rotation by putting his field to buff their next incoming bursts.

Bennett:
Healer, buffer, one part of the Pyro Resonance

Another team composition that relies on rotation. When Venti uses his Elemental Burst, he usually controls enemies by keeping them moving in midair, taking them away from players’ skills and Bursts. Not with Chongyun and Mona though, all their abilities are able to hit during Venti’s Burst.

The three essential buffers and debuffers for this team composition are Venti, Mona, and Bennett. Using them is what makes their rotation overpowered, especially in this order. After using Bennett’s Burst, Mona should come out to use her burst, further amplifying the team’s damage.

On the other hand, Venti will act as a battery since he’s one of the best batteries in Genshin Impact and reduce enemies’ resistance to the elements he swirls with.

Genshin Impact is now available on Mobile, PC, PS4, and PS5. A Switch version is in development.