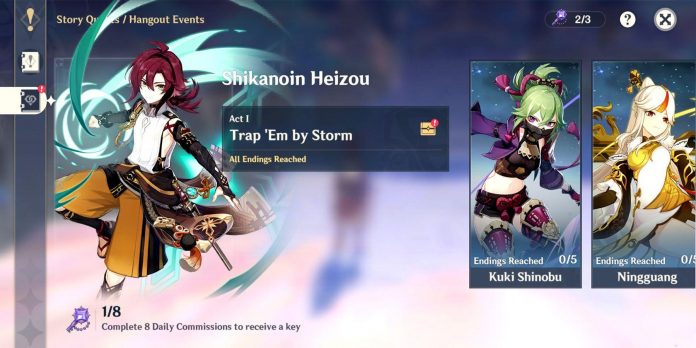 Shikanoin Heizou is the first male Catalyst wielder in Genshin Impact. Unfortunately, unlike the community’s idea of a “male mage,” Heizou ended up being a melee combatant instead. Nevertheless, his design and voice easily appeal to the fans, making his Hangout even more exciting to experience.

To reach the first ending of Shikanoin Heizou’s Hangout, players must choose either:

Okay, I’m curious about your dream, too. I’ll assist your investigation. I think your dream’s really out there, but I’ll tag along since you’re determined to stay.

Then, later on, when Heizou feels like he’s deceived by Genshin Impact’s Gorou, choose:

Alright, you’ve convinced me that there might be some secret here. What do we do?

Meanwhile, choosing to go to Ritou will end the Hangout as Heizou will insist on staying on Watatsumi Island.

In this Genshin Impact ending, Heizou will reveal that Gorou and Todoroki are trying to cheat the system to avoid paying hefty taxes. For this, they pretend to raid some bandits to get some precious commodities.

The Detective understands Watatsumi’s point of view, and so he decided to stay on the island until this issue can be resolved with the existence of Commodity Bills.

For the second until fifth ending, choose either:

When Heizou asks about the case files, to get the second and third ending of Heizou’s Hangout Event, pick:

Next, when Genshin Impact’s Arataki Itto was performing on stage, help him catch the scammers by telling him:

Itto, keep an eye out for Etsu and Iba!

Travelers’ hint allows Itto to catch Etsu and Iba in action. He manages to stop himself from getting scammed and losing a fictional 500,000 Mora check. However, a few minutes after, Itto found that Heizou was conning him all along and never planned to give him a large Onikabuto. Instead, the Oni merely got a large replica of the beetle.

For the third ending, follow the first two steps of the second route, but this time, instead of telling Itto to watch out for Etsu and Iba, players must choose:

In the third ending, Itto still manages to avoid getting defrauded, although in his own, unique ways. However, he gets upset later on when he learns that Etsu and Iba are the scammers the entire time.

To cheer the Oni up, Heizou lies and tells Itto that he too got scammed today. Heizou says that he thought he was buying a real Onikabuto but ended up getting a piece of furniture instead.

Happy that he’s not the only one getting outsmarted today, Itto gives the item to the Traveler to commemorate the day.

For the fourth and fifth ending, when Heizou inquires about the case files, choose any of the options except:

Then, at the end, when the Traveler is ready to speak to Sango and Ryuuji, conceal the truth by saying:

Sango was wrong about Heizou, and the murderer was indeed Shiroyama.

Even with the Traveler vouching for Heizou, Sango is still annoyed with the cheeky detective. Nevertheless, the issue between the two is resolved.

Meanwhile, for the final ending of Shikanoin Heizou’s Hangout event in Genshin Impact, players need to reveal the hidden truth and say:

Detective Heizou hid some evidence, the truth of the matter is…

Despite the others worrying that Ryuuji will get depressed, he manages to exceed everyone’s expectations and gets over the matter easily.

Like typical Hangout Events in Genshin Impact, there are three Genshin Impact achievements players can get from Shikanoin Heizou’s Hangout:

You Thought We Were For Real, Eh? An Ideal Detective Am I Sangonomiya Supplications

The first one is automatically rewarded once players obtain all the Hangout endings, granting 20 Primogems in the process. Meanwhile, the other two are trickier.

To get the Sangonomiya Supplications achievement on Heizou’s Hangout Event in Genshin Impact, players must speak to Gorou after Heizou confronts Todoroki.

Meanwhile, for the An Ideal Detective Am I achievement on Heizou’s Hangout Event, players must choose the following answers when the Detective asks for the criminal’s motive and means:

Both achievements, An Ideal Detective Am I and Sangonomiya Supplications, grant 10 Primogems in total.

Genshin Impact is now available on Mobile, PC, PS4, and PS5. A Switch version is in development.

The LOTR Dungeons & Dragons project belongs to a promising trend