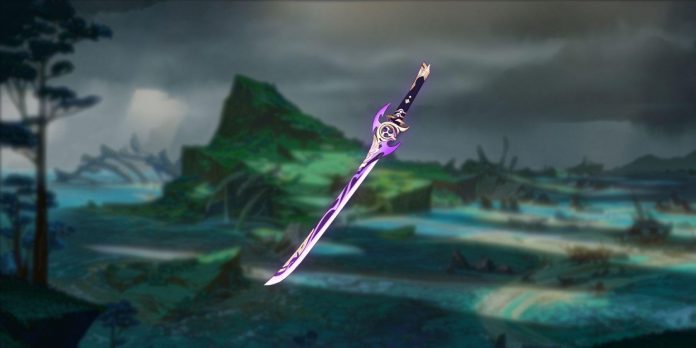 Genshin Impact continues to add new artifacts and weapons to the game with almost every new update. The current 2.7 update has brought a new five-star bow called Aqua Simulacra, which serves as a signature weapon for the new Hydro Yelan character. There are two banner cycles in each update, which include two separate weapon banners with two five-star and five four-star weapons.

Each Genshin Impact weapon has a unique backstory and design, which often inspire players to create their own real copies. A recent post on the game’s official subreddit shows an impressive real-life model of one of the most popular weapons in the game.

Reddit user Wisperiacosplay shared an exciting copy of the famous handmade sword — Mistsplitter Reforged. The sword was introduced during the first Inazuma update in Genshin Impact Version 2.0, and since then it has become one of the most wanted weapons in the game. Wisperiacosplay is known in the community for copying various Genshin Impact items, including gear, weapons, and even wigs. Despite the fact that this is not shown in the video, the title of the theme suggests that LED lighting is built into the Mistsplitter.

I just want to show you our amazing Musou no Hitotachi with LED backlight from Genshin_Impact.

The redditor admitted his mistake by naming the sword Musou no Hitotachi, which is actually a sword technique used by Raiden Shogun. Fans really liked the overall design, and a couple of responses in the comments section claim that at first they thought the copy was part of the game’s official merchandise.

Mistsplitter Reforged is a limited Genshin Impact weapon that was recently featured on the second Genshin Impact 2.6 update banner. It is one of the best weapons in the game and is chosen by most DPS sword users, especially for characters who rely on dealing massive damage from the elements. The fact that its secondary characteristic gives additional critical damage means that the weapon is very flexible and can be used by most characters in the game.

His passive gives a significant 8-28% buff of elemental damage to the owner’s elemental. This means that these weapons are a great choice for supporting characters, such as the popular user Anemo Kazuha, who is expected to return in the upcoming 2.8 update. Kazuha is one of the best supports in Genshin Impact at the moment, as confirmed by the recent charts of the use of Spiral Abyss characters.

F1 2021 Presents The Protagonists Of Breaking Point, Their Story Mode