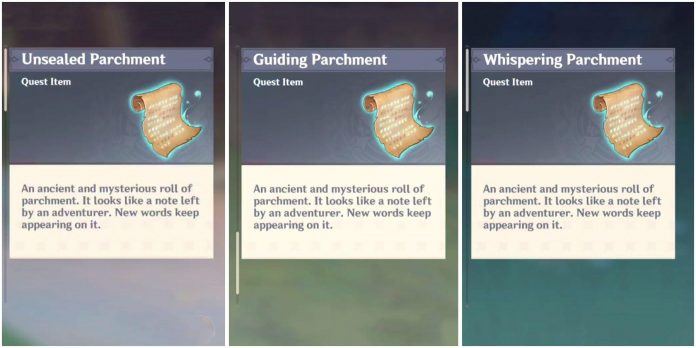 Much of the appeal of Genshin Impact is due to the well-designed characters and the exciting gacha system. But beyond that, the game is also beautifully written, and players can find new secrets at every turn. Given the number of hidden secrets that Travelers can discover from the many subtle hints, it’s not surprising that the game attracts even knowledge enthusiasts.

Among the secrets that players can discover in Genshin Impact’s Sumeru is an item called Unsealed/Guiding/Whispering Parchment. The name of the item changes depending on the number of items collected by the Travelers; after all of them are received, players can receive a Luxury Chest and a secret achievement. Here’s how people can solve the hidden quest “Mysterious Parchment” in Genshin Impact.

How to get an Unsealed/Guiding/Whispering Parchment in Genshin Impact

To complete the hidden quest “Mysterious Parchment” in Genshin Impact, players must collect three pieces of parchment in three different locations. When one piece is received, the item will be displayed as an unsealed parchment. The name will change to the Guiding Parchment of two parts, and then finally the Whispering Parchment after all three parts are assembled.

Players can collect pieces (in any order) from the following locations:

After receiving the Genshin Impact Whispering Parchment, use the teleportation point to the southeast of the Seven Devantaka Mountain Statue. If the teleport waypoint is not available, this is due to the fact that travelers need to complete the Vimana Agama quest line first.

Once Genshin Impact Travelers are inside the cave, go north and jump down. There should be a camp with four torches around. Then light the torches in the correct sequence to open the Genshin Impact luxury chest.

Finally, open the chest to get the final version of the parchment called “Mysterious Parchment” and the achievement “Call of the Nameless City”. In addition, the Luxury Chest will also provide:

Since Sumeru is a new region, Genshin Impact travelers are waiting for a lot of chests. These loot boxes will give a certain amount of primogems depending on their rarity, while a regular chest gives the least amount of primogems, and a luxury chest gives the most. This currency is the most important in the game, as it is used for the gacha system, where players can get new weapons and Genshin Impact characters.

Meanwhile, Dendro Sigils are used for offerings in the Tree of Dreams, the same system as the Sacred Sakura Tree in the Great Narukami Shrine in Inazuma. This Dream Tree can be found in Vanaran, a place in the Twilight that can only be unlocked by completing Aranar quests.

Superman can be defeated by one Green Lantern (but not the...