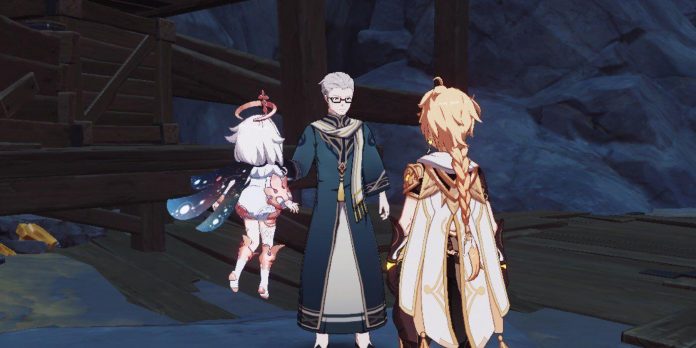 Genshin Impact’s latest event includes navigating through danger once more. In “A Muddy Bizarre Adventure,” players must investigate dark mud-like substances flooding the Underground Mines of The Chasm in Genshin Impact. By helping a Sumeru researcher, players will be able to uncover the cause of this crisis. This event will be active until July 4, 2022, at 03:59 Server Time.

To participate in this event, players must be Adventure Rank 28 or above. Players must also complete the World Quest “Surreptitious Seven-Star Seal Sundering.” This is the quest that unlocks the Underground Mines of The Chasm. To begin, players will need to speak to Katheryne in Liyue Harbor. She will direct them to the NPC Hosseini, who is located in the Underground Mines.

Related: Genshin Impact: How To Remove Dark Mud In The Chasm

This Muddy Bizzare Adventure event requires the use of the Lumenstone Adjuvant gadget, which is rewarded in the World Quest “Chasm Spelunkers.” Players will need to collect Lumenstone and Lumenspar in Genshin Impact in order to upgrade the gadget. Level 2 is required to dispel the Dark Mud flooding The Chasm. As players progress in the event quests, the difficulty of cleaning the Dark Mud will increase.

The Pursina’s Spike is a device that can release energy that affects the Ley Lines. By putting these devices in areas where the Dark Mud is most evident, players can help clear the threat. For the first Muddy Bizarre Adventure quest in Genshin Impact, players will need to protect the Pursina’s Spike from enemies. This will be located beside Hosseini. Players will be given three minutes to eliminate 21 enemies spread across three waves. The enemies include: Hilichurls, Mitachurls, Samachurls, and Abyss Mages.

It is recommended to bring a healer or shield character such as Genshin Impact’s Barbara, Diona, or Zhongli as walking across the Dark Mud will drain HP. There are many groups of small enemies, so an Anemo character such as Sucrose or Venti will aid in crowd control. A Cryo Abyss Mage and Pyro Abyss Mage will appear towards the end of the waves; Swirl them together with an Anemo character to break their shields quickly. After successfully protecting the device, return to Hosseini.

For this Muddy Bizarre Adventure quest, it is recommended for players to upgrade their Lumenstone Adjuvant gadget to Level 3 since the Dark Mud has become stronger. Players will need to wait until the next in-game day to continue from the previous day. To speed up the process, they can adjust the time using the Paimon menu. Hosseini can now be found to the right of the Ad-Hoc Main Tunnel.

Related: Genshin Impact: How To Complete The Chasm Delvers Questline

By using suitable team compositions in Genshin Impact, players will be able to protect the Pursina’s Spike once more. Clear all Dark Mud and avoid hitting the device directly; doing so will cause the device to shut down. The enemies will spawn in waves similar to Day 1, though there will be more Dark Mud to dispel. There are recharge areas stationed all around; dispel the Dark Mud and quickly recharge.

Players will need to multitask between dispelling Dark Mud, fighting enemies, and making sure the Lumenstone Adjuvant gadget remains charged. When the Pursina’s Spike fully gains 100% charge, the quest will be cleared. Afterward, they must speak to Hosseini to complete this Muddy Bizarre Adventure quest.

For Day 3’s Muddy Bizarre Adventure quest, it is recommended to have at least Level 4 of the Lumenstone Adjuvant gadget. Hosseini will be located northwest of The Chasm: Main Mining Area. There will be multiple places to recharge Genshin Impact’s Lumenstone Adjuvant device. Be sure to activate any Lumenlamps before beginning the challenge.

In “Circulation Theory,” the Pursina’s Spike will release a shockwave as players defeat opponents within the time limit. This shockwave will inflict DMG as well as dispel any buffs the opponents possess. Keep the Pursina’s Spike free of Dark Mud in order to receive its aid in battle. This quest will give players some reprieve as there are slight delays between the waves of enemies. It gives enough time for players to dispel the Dark Mud before the next wave begins.

Players should be sure to have a healer and Anemo character in their team as this will aid their battle. If players require additional help, they can look to Genshin Impact’s Co-Op Mode. However, only the host player will be able to use the gadget against the Dark Mud. After this quest is completed, speak to Hosseini.

“Emergency Escort” is similar to the “Safe Conduct” quest from Genshin Impact’s Daily Commissions. Players can find Hosseini closer to The Chasm: Main Mining Area’s Teleport Waypoint. This quest involves escorting the hot air balloon to its destination. Players will need to fend off monsters and dispel any Dark Mud they encounter along the way. If there are any in the path of the balloon, it will stop its transportation process.

There will be multiple Activation spots along the route. Interacting with these spots will recharge the Lumenstone Adjuvant device if there are no nearby Lumenlamps. The enemies will be shrouded in a purple smoke when they are enhanced by the Dark Mud. Players will know all available Dark Mud is dispelled when this purple smoke disappears from the enemies.

As the last quest of the Muddy Bizarre Adventure event, this involves finishing the cleanup work of the Dark Mud. Hosseini can be found in the center of The Chasm: Main Mining Area. The Pursina’s Spike will aid the players once more. Similar to the previous challenges, players should be sure to utilize Genshin Impact’s support characters. Rather than charge the device, players will need to defeat as many enemies as they can to accrue a score. There will be Normal opponents and Elite opponents to defeat as well as Oozing Concretions to clear.

Enemies such as Hilichurls, Mitachurls, Ruin Serpents, and Ruin Guards will appear. To obtain all the Genshin Impact rewards for this quest, players must reach a combined challenge score of 4000. This means if players fall short of this score in the first attempt, the second attempt’s score will add on to the previous one’s.

Founder and head of Studio 343 Industries Bonnie Ross is leaving...