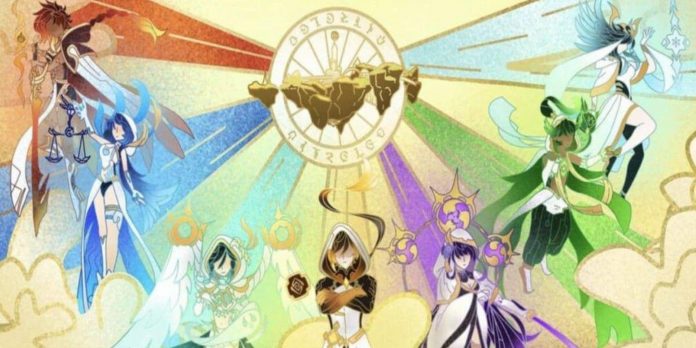 Genshin Impact features hundreds of unique lore entries for Teyvat, but information about the Seven and the Archon Wars is some of the most important. Players that progressed through Mondstadt, Liyue, and Inazuma have encountered several mentions of the Seven and the Archon Wars. While most lore players receive is second-hand information or recollections from history books and legends, there are many lasting, physical remnants from the Seven’s rules and the Archon Wars. Additionally, many World Quests explain what happened thousands of years before the Traveler woke up and began their adventure.

In Genshin Impact, players control the Traveler, a mysterious warrior from another world searching for their sibling. After a confrontation with an Unknown God during an apocalypse, the Traveler is locked away for thousands of years. When they wake, they venture throughout Teyvat and search for answers to the world’s mysteries. Players can currently explore Mondstadt, Liyue, and Inazuma, which all feature unique quests and characters. Players collect Primogems and other rewards to cast Wishes and obtain powerful characters and weapons, giving the game its gacha genre.

Paimon is the Traveler’s guide in Genshin Impact and provides vital information for surviving Teyvat. She covers topics like Elemental abilities, enemies, and current events in the world, but also becomes an essential companion to meeting the Seven. Natives to Teyvat regard the Seven as gods, but their true identities and powers are not always described clearly. However, some people and events aren’t as well-known as these rulers, such as Genshin Impact’s Archon Wars, which took place between thousands of gods and powerful creatures. Despite the long-lasting effects of these events, much of Teyvat’s history remains a mystery to players who don’t thoroughly explore the open world.

Who Are The Seven In Genshin Impact?

In Genshin Impact, the term “god” can refer to many things, as there have been thousands of beings to claim the title throughout history. However, The Seven always refers to the seven ruling Archons of Teyvat’s seven nations. Despite their immortal status, it’s possible for Archons to rise and fall, though the exact circumstances of these deaths are rarely known. Unlike most warriors in Genshin Impact, Archons are capable of wielding elemental powers without a Vision. The only other character capable of this ability is the Traveler – though it is unknown if their twin also shares this power. Instead, Archons use a mysterious capsule called a Gnosis, which resides inside their bodies. Each Archon wields a specific element and represents a different ideal, usually reflected in their nation’s culture and lifestyle. The Seven’s current membership consists of:

Barbatos, God of Anemo and FreedomRex Lapis (or Morax), God of Geo and ContractsRaiden Shogun, Goddess of Electro and EternityKusanali, Goddess of Dendro and WisdomUnknown Archon, Goddess of Hydro and JusticeMurata, Goddess of Pyro and WarThe Tsaritsa, Goddess of Cryo and an Unknown Ideal

Genshin Impact features several regions with extremely diverse cultures. Players start in Mondstadt, Barbatos’ kingdom, and immediately witness the unique ways The Seven rule their lands. Unlike most territories, Barbatos has left his people to govern themselves to embrace his Divine Ideal. Though the Anemo Archon sticks close to monitor his people in dangerous times, he keeps his influence (mostly) out of their affairs. Rex Lapis, known as Morax by Liyue locals, descends once a year to make predictions and set the tide of the kingdoms. The final Archon players have met is the Raiden Shogun, who isolated her nation with a thunderstorm and enacted a dictatorial rule over her people. It’s unknown how other members of The Seven rule their nations, but it’s clear there aren’t enforced guidelines from Celestia about how to lead.

What Were Genshin Impact’s Archon Wars?

Though the current Archons in Genshin Impact are considered gods, they aren’t the only infinite beings throughout Teyvat. World Quests throughout Genshin Impact refer to the existence of other immortal beings, and Archon Quests sometimes pit the Traveler against enemy gods resurrected from their graves. The gods appeared to live in peace for years, unknown circumstances resulted in a sudden power struggle over the Seven Divine Seats of Celestia. Some NPCs throughout Teyvat also reference gods with different plans for humanity, ranging from benevolent to vengeful.

Related: Genshin Impact: Who The Five Yakshas Are

Lore in Genshin Impact references the Archon Wars beginning around two thousand years ago, resulting in the mass casualties of gods across Teyvat. In Old Mondstadt, combat occurred between Decarabian, God of Storms, and Andrius, King of the North Wind (a weekly Genshin Impact boss). However, Andrius was ultimately incapable of dealing damage to his opponent and chose to let his body die, residing in Wolvendom until the present day. Finally, a human-led rebellion against Decarabian assisted by Barbatos brought about the new order in Mondstadt.

In Liyue, Rex Lapis worked alongside Guizhong, God of Dust, and lived peacefully alongside the humans and the adepti. Unfortunately, Guizhong perished against encroaching gods, leaving Rex Lapis to create Liyue Harbor and defend his territory along. Osial and Chi are two of the only known gods to face Rex Lapis in combat. Little information about the Archon War in Inazuma is known, though HoYoverse could release more details in the next update. After the Archon Wars, Rex Lapis and Barbatos claimed their place on the Geo and Anemo thrones; however, these Archons are the only two to maintain their positions throughout the years.

How Do The Archon Wars Influence Genshin Impact?

Genshin Impact’s open world is filled with remnants of the Archon War, but the most notable locations are Stormterror’s Lair and the Guyun Stone Forest. Locals once referred to Stormterror’s Lair as Old Mondstadt, which remained Decarabian’s seat of power until his demise. Remnants of the battle and violent wind surges still exist today, but adventurers brave enough to explore the territory are rewarded with rare and valuable materials. Guyun Stone Forest features more traces of battle between the Archons and is the prison of several powerful gods pinned by Rex Lapis’ spears. It’s one of the few locations in Liyue disconnected from the mainland, suggesting the true, destructive power of the Wars’ combatants.

The Seven are important characters to Genshin Impact, and fans are likely to learn more as the story progresses. Since the Traveler plans to encounter every member of the Seven to track down the Unknown God, interactions with these Archons are guaranteed. Unfortunately, it’s unlikely for players to explore the Archon Wars in their entirely without time travel.