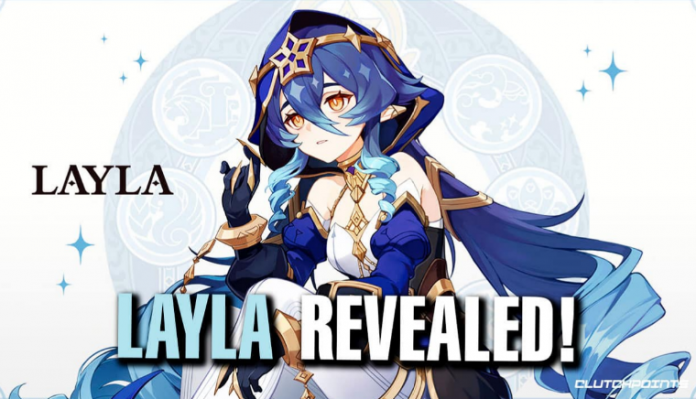 Layla is one of the two characters you can play for in this update. Next to her is the Archon Nahida Arboretum. Fans of the game were surprised by this discovery, since in version 3.0 there was no mention of Leila when we first set foot on the land of Twilight.

At the same time, we can still expect Leila’s presence in some form in the upcoming version 3.1.

Layla is a character we haven’t heard of in the game yet. Judging by the caption to her ad, “half—awake, half-asleep, distrustful” Leila is a student specializing in theoretical astrology. Perhaps we will see how she interacts with another certain character who looks at the stars in the future?

“Fantastic Evening Star” Leila is a cryo character. As someone who “tirelessly draws star maps,” her astrolabe name Luskinia, which can mean “night sky,” refers to this fact.

A student of ritavahist, Leila specializes in theoretical astrology and tirelessly draws star maps to write a dissertation.

Because of the high expectations of her teachers, her desk is always littered with a mountain of papers, which never seems to decrease, no matter how hard she tries.

Suffering greatly from severe lack of sleep, the stars began to spin before her eyes, as soon as she at least looked at her blank manuscript.

This could not be, and so she decided to take a short break, so that after that she could face reality face to face with a clear mind.

When she woke up, her empty manuscript was now decorated with myriad stars.

Layla rubbed her eyes to make sure she wasn’t dreaming. Somehow, the thesis that had to be submitted tomorrow was now clearly written on the pages in front of her.

Was it a “Thesis that fell from the sky”? Or “The Blessing of the Stars”? Or could it be… “sleepwalking” is what the legend says?

… There was no time to think about such things — the next lesson was about to begin.

“She always says she’s overloaded with writing her dissertation and drawing star charts, but she’s more resilient than anyone and refuses to fall behind… Why do I know her so well? Hehe…” — A mysterious girl who calls herself “The Blessing of the Stars”.

In the accompanying description published in the Genshin Impact Officia HoYoLAB message for Leila, her title “Half-asleep, half-asleep, distrustful” is explained. Especially the “Half-Asleep” part, as it describes her life as an Academy student. It also mentions a “mysterious girl” known as “The Blessing of the Stars” who seems to have fallen in love with Leila and helps her in her daily life.

As for the direction of her studies, she is studying on ritavahista, one of the six darshanas. Darshans are the main schools of the Sumeru Academy.

Rtavahist specializes in illuminationism or the study of stars. As expected, it includes Layla’s astrology and even astronomy. In a conversation with the NPC, we learn that the Ratavahist school believes that studying the stars will lead to the truth, and that the stars write the destinies of people. This again sounds plausible for some of Mona’s beliefs.

Leila is not the first student of this Darshan that we have met, because we have already met with another ritavahist student: Haipasia.

The Sims 4 Dates Its Next Expansion Pack, Village Life