Home Entertainment Genshin Impact: how to unlock the coordinates of the sun and rain 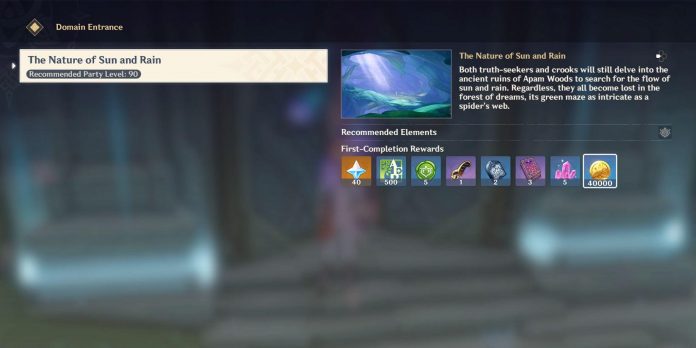 Like any region in Genshin Impact, Land of Wisdom Sumeru is filled with a variety of exciting mechanics, including new enemies, non-player characters and local tasks. The latter will undoubtedly help players learn more about the people and civilization of Sumeru, and as a bonus, it rewards with precious primogs.

Another amazing mechanic is new domains scattered around the Twilight and waiting to be discovered. One of them is the Coordinates of the Sun and Rain, which requires three quests to unlock. The Genshin impact domain can be found south of the Apama Forest on a lonely island blocked by a special barrier.

To unlock the Coordinates of the Sun and Rain Domain, players need to eliminate the obstacle blocking the path. After completing Varun Ghath’s world quest, head southeast from the weather-altering device up the slope and use any Dendro character in Genshin Impact to activate the Dendro Monument. If not available, call Dendrograna to use any character.

The Dendro object will appear above the monument, but it will not be activated by the usual Dendrograna.

Here, players need to follow the trail going from the monument to a broken Sprouting branch guarded by enemies. Defeat them, then go to him and use an Old Lyre to play the Rhythm of the Sprout, repairing the branch and getting a Healthy Dendrogranum.

Go back to the monument and use the Genshin Impact Bow character to shoot at the Dendro object. The barrier will disappear, and the Coordinates of the Sun and Rain Domain will become visible.

The domain can be found south of the Apama Forest on a lonely island. Head to the teleport waypoint southeast of the Apama Forest and head west to the island where there is a large tree. In the middle there is a hole in the ground that leads to a large underground area. If the players follow the path, they should end up in the Coordinates of the Sun and Rain Domain.

Necessary quests to unlock the Sun and Rain Coordinates domain in Genshin Impact:

The first one will reward you with a Vintage Lyre, an important gadget that will be used many times later. The World of Aranara quest also brings players to the “real” world of Aranara.

The second world quest line is Varuna Ghatha, which is divided into three quests; The Memory of a Stone, an Angry Piece of Iron and Dormant Roots. Each of them will force the Traveler to find a unique “branch”, and then change the direction of the three “leaves” to it in Genshin Impact.

The “Sprout Feeding Rhythm” quest is the most important of all, as it rewards players with a “Sprout Rhythm” that will repair a broken sprouting branch containing a healthy dendrogranum. Without it, it is impossible to open the Coordinates of the Sun and Rain.

The Sims 4 High School Expansion is Apparently Confirmed with a...