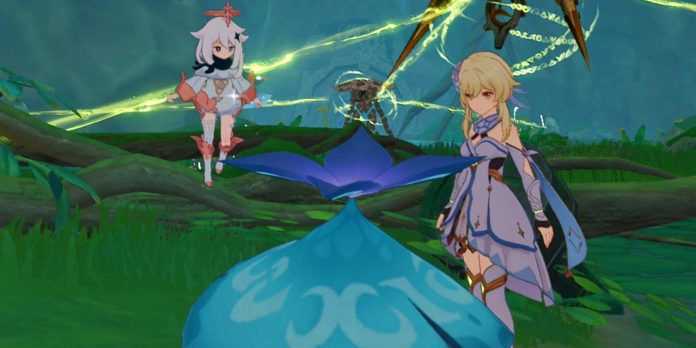 In the Vimana Agama chapter of Aranyaka Magazine, Genshin Impact players must help the researcher Jazari enter the giant Guard of Ruins on Mount Devantaka. However, to open the door, the researcher needs some kind of key, called the Amity Device. It is said that this mechanical component belongs to a famous adventurer. After questioning the descendant of this adventurer, travelers will soon find out that this key is divided into three parts.

How to lower the water level in Genshin Impact

To lower the water level in Genshin Impact, players must follow the quest marker to a place with the Good Ones. Follow this Good One to his Good Court in the nearest hall.

After that, travelers need to find a second Good One. The creature should be right under the previous Good Yard, so just go there and slowly follow it.

As soon as both Seelie return to their Seelie Court, an Exquisite Chest will appear and the mechanism will be unlocked. Activate the machine to lower the water level in Genshin Impact.

How to lower the water level in Genshin Impact even more

Going further into the cave, Genshin Impact travelers will soon need to lower the water level even further. To do this, players need to find an area with three Dendro Elemental monuments.

To solve this puzzle, first call Dendrograna from its branch. Then use aimed or loaded shots to shoot three Dendro objects on top of the Dendro monuments. This will eventually remove the seals from the monuments.

After the Dendro Elemental Monuments are unlocked, use the Dendro to activate them. Players must follow the flow of the green aura as shown on the Dendro objects.

Start with the Dendro Monuments on the highest platform, then shoot the one on the left, then activate the Monument on the right. If the players have completed all the steps correctly, the mechanism next to it will unlock and a Luxurious Chest will appear. Don’t forget to get the Genshin Impact Chest, as it contains 10 precious Primogems as well as four Dendro Sigils.

After that, slide down to find the mechanical component. The place is highlighted with a quest marker, so just follow it. A fragment of the Amity device (II) can be obtained in this cave.

If they haven’t already, Genshin Impact travelers need to find the third and final fragment next. After that, a giant Guard of Ruins will become available, and players will be able to do something interesting, for example, connect all four Relays in Genshin Impact.

Skull & Bones Is “A Very Promising IP” That Focuses On...