Home Entertainment Genshin Impact: how to highlight all the drawings near the forest statue... 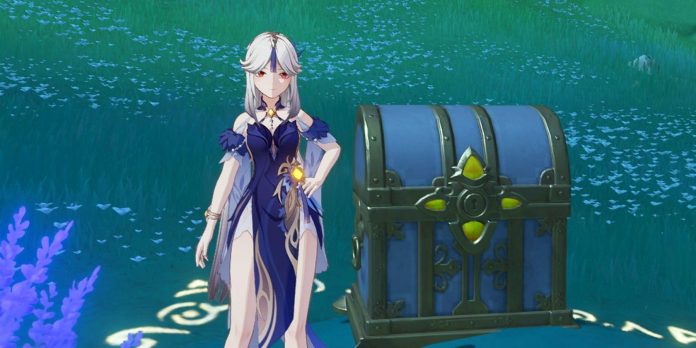 Luxury chest is the best kind of chest in Genshin Impact. It has the highest number of awards compared to other loot boxes, with the Precious Chest taking second place, and the Ordinary Chest is the most common.

Since Luxury Chests are very valuable, it is not easy to get them. Players need to solve a difficult puzzle, complete a long quest or discover a hidden secret. A luxury chest can also be obtained at the Genshin Impact Shrine of the Depths.

Somewhere east of the Mawtiyima Forest (southwest of the Electro Regisvine boss), players can find a stone surrounded by some kind of inscription. These drawings are darkened at first, but after completing certain steps, Genshin Impact players can highlight the drawings. As soon as all three inscriptions are activated, a Luxurious Chest will appear.

To find the drawing, the easiest way is to use waypoints in the Mautima forest. Go east to the marked place until the players find the stone. The location is located somewhere between the forest statue of the seven Mavtiim and southwest of the boss Electro Regisvine.

To activate all three inscriptions, players need to find locations with an arrow. Every time Paymon will make a remark about the surrounding arsonists. Defeat the slugs, then interact with the nearest Tri-Lakshana objects to continue the puzzle.

How to light up the drawings and get a luxurious chest

First, use the teleport waypoint to the west of the chasm in Genshin Impact and go northeast to the marked area. After defeating the fire slugs, use the Dendro on the nearest tree to open the mechanism. Activate it to light up the arrow.

Then find more fire slimes in the Mautima Forest. Then use Electro to activate the nearest mushroom. Activate the mechanism again so that the arrow lights up.

Finally, head west from the Chatrakam Cave to find the fiery slime surrounding the bouncing mushroom. Defeat the enemies, then use Electro on the fungus. Jumping on an activated jumping mushroom allows players to jump very high.

Look up and use the Signs of the Four Leaves to reach the Arboretum high above. After taking the Eyepiece, the last arrow will light up.

If players have completed the Agnihotra Sutra quest by going a little further north, they will lead them to a place where they can unlock a hidden teleport waypoint in Genshin Impact Sumeru. This device is not marked on the map and is not called by any quest, so Travelers have to look for it on their own.

Once all three arrows are activated, return to the stone to find the luxury chest. Players need to defeat several enemies before they can open the box.