Home Entertainment Genshin Impact: How to Finish Chapter 4 of the Aranyaka (Agnihotra Sutra) 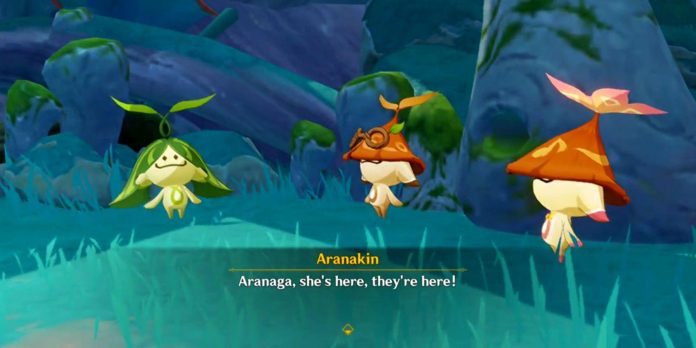 Aranyaka is a magazine of forest adventures in Genshin Impact, which consists of several chapters. The Agnihotra Sutra is the fourth chapter, and it is the most difficult chapter to complete. This, in addition to the fact that Aranyaka did not give instructions, can make the task really confusing for the players.

To complete the chapter of the Agnihotra Sutra in Genshin Impact, the magazine only states that players can meet Aranara again if they return to the place where they traveled together. Fortunately, following this guide, players will not need to repeat all their steps, and they will be able to easily finish chapter 4 of Aranyaki.

How to Start Chapter 4 of Aranyaki in Genshin Impact

In the Agnihotra Sutra quest chain, Genshin Impact players find Aranara on Gandha Hill. To start this chapter of Aranyaka, go to the marked place and find three hermits near the cave. After talking to the mercenaries, find Aranara to activate the quest.

In the Agnihotra Sutra, players embark on an adventure with three aranaras using a gadget called “Kusava”. Unfortunately, this item is only used in this quest, so players will lose it after completing the quest chain.

How to Complete Chapter 4 of Aranyaki in Genshin Impact

To finish chapter 4 of Aranyaka, Genshin Impact travelers must return to the “place where you traveled together” to meet Aranara once again.

The completion of the Agnihotra chapter of the Aranyaka Sutra is a bit more difficult than the other chapters, as it includes three separate parts; a drawing of Araguru, an Old friend of Aranakin and the Memory of Aranaga.

To launch the additional quest “Drawing Araguru” in Genshin Impact, go to the entrance to the cave to the north of the Chatrakam Cave. Paymon will make a remark about hermits if the players visit the right place.

Kill the enemies inside the cave until a mini-boss named Azrul Farrokhzadan appears. Defeat him, and Araguru will appear soon after. The creature completely forgot who the Wanderer was, but still allowed the main character to help.

Then explore the three glowing spots in the marked area until Genshin Impact travelers find a letter titled “Employer Orders”. After that, talk to Araguru to complete the quest.

An old friend of Aranakin

Now go north from the Araguru Cave to find the singing Aranakin. When the Aranara forget who the Wanderer is, they will hide. Play a vintage lyre to encourage them to come out. This quest is not difficult at all, so just follow all the instructions to finish it.

Finally, “Memory of Aranaga” is the most difficult quest of all. First, the travelers must find an old man east of the northern teleport point in the Mavitima Forest. If the person is not there, then try to log in again. It may take several re-logins and re-visits before it appears. The old man will introduce himself as Khayyam.

Follow the quest chain until the Travelers get to the stage where they perform a ritual with three aranars. After reviving several flowers with the help of forest creatures, return to the northern waypoint of the teleport. This time, slide south-east to another small camp with a boiler.

Talk to Khayyam, NPC Genshin Impact, again to complete the Agnihotra Sutra quest. Players will get a tick in Chapter 4 of their Aranyaka once all quests are completed.

Like last time, if there is no Khayyam, try logging in and teleporting back and forth. There won’t be a pot if Khayyam isn’t around, so this should be a simple guideline.

The Last Kingdom: Alexander Dreymon paid tribute to one of the...