Home Entertainment Genshin Impact: how to find a branch with Aranakula 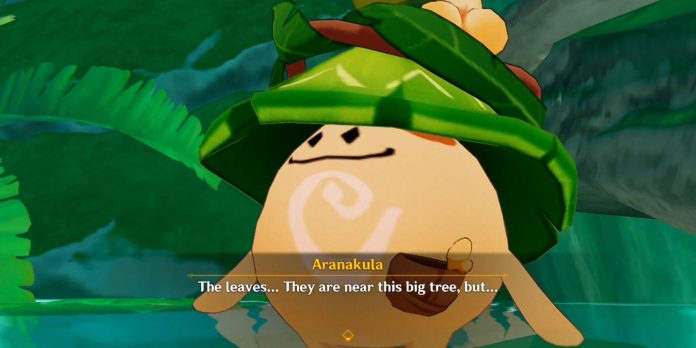 Aranakula in Genshin Impact is one of the aranara involved in Varun Ghatha’s quest line. Chapter 3 of Aranyaki in Genshin Impact sends players on a journey to repair Varuna’s Device in the Apama Forest. Judging by Aranar’s stories, this Device was installed long ago by the Golden Nara. Because of this, the Golden Nara was nicknamed “Nara Varuna”. This Golden Nara/Nara Varuna is probably the twin of the Wanderer, as they told Aranara that another Golden Nara would meet them in the future.

After Varuna’s Device is repaired, Travelers will be able to change the weather in the Apama Forest. The weather in this area is unstable, constantly rainy, then sunny. However, Contraption allows players to choose either one or alternate between them. The weather in Apam Woods will cause changes in the environment. For example, setting the Varuna Contraption device to “sunny” is crucial when players complete the “Short Encounter with a Rare Bird” quest in Genshin Impact. This is because the Twilight Birds participating in the quest will not be present if it rains.

However, before using the power of Varuna’s Device, players must first find a Branch along with Aranakula and turn the Leaves towards the Branch.

How to find a branch with Aranakula in Genshin Impact

To find the Branch along with the Aranakula in Genshin Impact, go to ground level and find a secluded cave in the marked place. When the Cave is found, enter it to continue the quest with Aranakula.

In this cave there is a Branch that will later become a landmark for the Leaves.

To find the Leaves, all the players need to do is get to the entrance to the Cave, where they will be met by a lone Good One. Follow it and it will lead the Traveler and Paymon to each of the three Leaves. If the Genshin Impact Traveler approaches the leaves, each leaf has the opportunity to turn around. In fact, all these Leaves should rotate towards the cave where the Branch is located.

To do this, either remember where the Branch was, or follow the homing auras, leaving a trail on each leaf. These green auras leave a trail that tells players exactly where to rotate the leaves. After the Leaf turns to face the Branch, the aura disappears, so it can be used as an indicator.

The sequel to Tales From the Borderlands gets a rating, full...