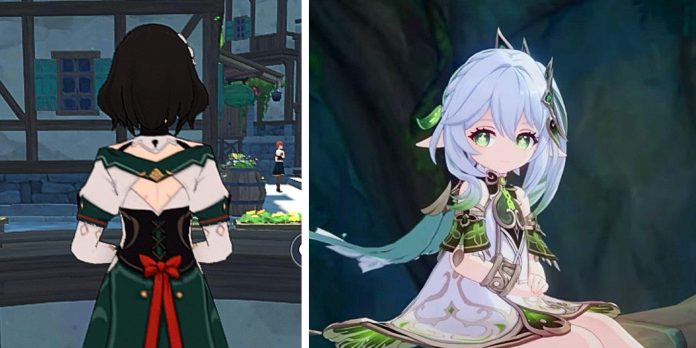 Katherine is the ubiquitous secretary of the Adventurers Guild in the main regions of Genshin Impact. She has been there in Mondstadt since the beginning of the main storyline, and is present in the recently released Sumeru with her symbolic line “Ad astra abyssosque!”

It became a joke for Paymon and the Traveler to comment that she is everywhere they go. Although the game has never really revealed this oddity, the latest Archon Quest in Sumeru confirmed what Genshin Impact fans have long been theorizing.

Genshin Impact Catherine is a robot

Even before the release of Twilight in Genshin Impact, players noted some oddities of Catherine’s character. Firstly, its overall dialogue and appearance are identical, regardless of which region it is located in. This could easily be ignored if not for other, more important details. Players can find what looks like a keyhole in her back collar, right at the base of her neck. Even more strange is that in Catherine’s empty quotes there are her mutterings like “Error” and “Reboot”.

Now this mystery can finally be solved, as in the second act of Sumeru Archon Quest, Nahida from Genshin Impact confirms that Catherine is a robot. During the quest, Nahida takes Katherine’s body and uses it to talk to the Traveler. According to the young Dendro Archon, it can occupy the consciousness of anyone as long as he is connected to the Akasha Network. However, Nahida respects the free will of her people, so she never actually captures anyone’s body. The exception is Katherine, because she is a “bionic snow puppet,” as Nahida explains.

However, the truth about Catherine raises more questions than answers, especially about whether players can trust her. Her direct connection to Snezhna may mean that she is related to Fatui, and some players note that she could have been created by Sandron from Genshin Impact Fatui Harbingers. And if Katherine is Fatoui’s tool, it’s worrisome, since she’s been privy to the Wanderer’s movements since the beginning of the game.

Aside from Catherine’s devotion, there are also questions about her robotic nature. First, it’s unclear if Katherine’s units are remotely controlled or if they’re advanced enough to think for themselves. The first may mean that Catherine has no identity of her own. The latter may lead to a more interesting twist in the main story, since Catherine will be somewhat similar to Scaramouche from Genshin Impact – an artificial person with his own will. Thus, she could potentially choose to side with Fatoui or the Wanderer at some point in the storyline.

However, at this point, the revelation of Catherine’s true nature has not yet affected the broader narrative of Genshin Impact. Neither Paimon nor the Traveler had said anything about it since he was mentioned in the Search for the Archon, and it seems that Catherine just continued to fulfill her duties as an administrator of the Adventurers Guild. This is not surprising, since each player needs to talk to Catherine to get their rewards for the daily commission and send their characters on expeditions.

However, it would be interesting to see what HoYoverse plans to do with Catherine’s character in the next Archon quests. It may even play a more important role in the area of the Genshinsky strike on Snezhnaya. In any case, it’s nice to finally get confirmation of one of the oldest theories floating in the Genshin Impact community. Perhaps more fan theories will be confirmed (or disproved) as the game’s main storyline develops.