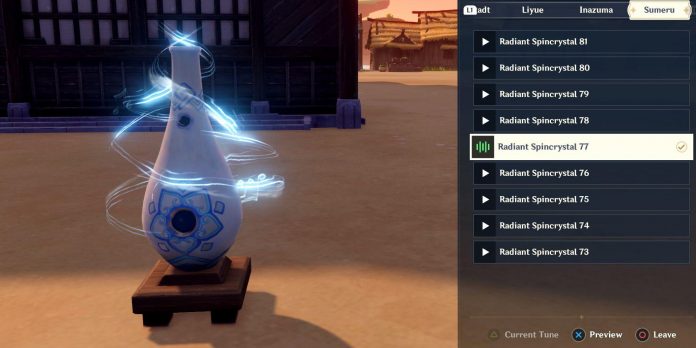 Exploring the Land of Wisdom, Twilight, in version 3.0 of Genshin Impact, it is quite natural to stumble upon some Shining Spin Crystals, as in many other regions of the game. Radiant Spincrystals are precious items that can only be used inside the Serenitea pot. Each of them contains a special soundtrack belonging to a specific region.

The only way to enjoy Radiant Spincrystals Genshin Impact is to buy two pieces of furniture at Teapot Spirit Tubby; Euphonium Unbound: Winding and Euphonium Unbound: Soaring. The first one is used to listen to soundtracks inside the main building, and the second one is used to listen to music outside. There are nine Radiant Spincrystals in Sumeru Genshin Impact 3.0.

To get Radiant Spincrystal 73, players must travel to a teleport waypoint north of the Mawtiyima Forest in Genshin Impact. Upon arrival, they will need to descend to the southeast and descend under a large plant to find an abandoned camp. Radiant Spincrystal is located on one of the boxes.

Then the players must go to the teleport waypoint of the city of Sumeru to the west of Gandha Hill. From there they will want to go north and fly to the green building opposite to find the Radiant Spincrystal 78 on its edge. This is above the Effendi (representative of the reputation of Sumeru).

Then players have to go to the statue of the seven Vanarans in Genshin Impact and run south. Once the road splits, they must turn southwest to use the four-leaf seals on top, and then continue using them until the players reach the tallest plant. Several enemies will guard the Radiant Spincrystal 74, so travelers need to be careful.

Now players will need to go to the teleport waypoint south of the Dahri Ruins. Once there, they must turn north, and then continue to slide down until a single four-leaf seal appears next to a wooden post. Using it, travelers will be able to get a Shining Spin Crystal 81.

After that, travelers must quickly reach the waypoint of the Port Ormos teleport and move east to descend the spiral path to the end. Then they can turn right to see Radiant Spincrystal 79.

The next destination is the Statue of the Seven Devantaka Mountains. Players will need to fly to the southeast to land on the arm of a huge Guardian of the Ruins. Genshin Impact Radiant Spincrystal 76 should be there.

The latter is a bit more complicated, as it is located in an underground cave. From the location of the previous Radiant Spincrystal on the big Ruin Guard, players must continue walking east until they reach the entrance to the cave. If they go down to the lowest level, where the ruin grader is chained, and follow the path, they will eventually come to the old big mechanism in the northwest. Then they can use the Signs of the Four Leaves to climb it and collect the Shining Spincrystal 77.

Usually, the remaining radiant spin crystals of Genshin Impact can be purchased from a traveling seller of a Chubby teapot, which comes on certain days of the week. However, since Sumeru has not yet been fully released, many of these precious items are still hidden.

Actor Kahn Jonathan Majors Responds To Being the Villain of the...