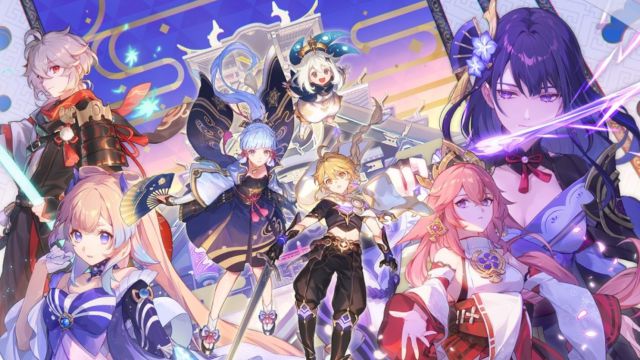 Following the version 2.0 expansion, the main story revolving around the Traveler, Archon Electro, various forces, and the people of Inazuma, will come to an end in the final chapter of the Archon of Inazuma mission with version 2.1. As the story unfolds, we can visit Watatsumi Island, home to the resistance army, and Seirai Island, a place of perpetual storms. On the other hand, in this new update new enemies await us such as Electro Hypostasis, Thunder Manifestation and Signora and the Head of the new Crusade Domain.

Sangonomiya Kokomi: The Divine Priestess of Watatsumi Island and supreme leader of the resistance army against the Shogun, she will join the fight as another 5 ★ character. Using the Hydro element and a catalyst as a weapon, she can effectively heal her teammates.
Kujou Sara: General of the Tenryou Commission loyal to the Shogun, she can perform ranged attacks with her bow and bring bonuses to the team.

The Moon Festival, a time when Liyue’s friends and families gather each fall to toast and enjoy local delicacies, will take place during version 2.1. During the festival we will meet Keching and Xiangling to cook and taste a wide variety of local foods and recipes and we will discover the origin of this ancient Liyue port tradition.

Treasure buffs will also be able to start a grand treasure hunt for Liyue, Mondstadt and Dragon Spin in the “In Search of the Moonlight” event. During the event, we will be able to obtain rewards and redeem resources, including the new 4 ★ greatsword, King of the Seas, as well as its refinement materials. In addition, we will be able to participate in the daily login event and obtain up to 10 Intertwined Destinations and other rewards.

Fishing, Aloy and other news

A new fishing system will be introduced from version 2.1. Players will be able to catch a wide variety of fish throughout Teyvat and turn them into cooking fish or exchange them for rewards or new rods in the Fishermen’s Guilds. Players will also be able to raise and feed special ornamental fish in the Spirit Cloud Pond, a new decorative item that can be crafted in the Kettle Relaxer.

On the other hand, starting with version 2.1, the first collaboration character Aloy, “Savior from Another World” will join the fight as a free 5 ★ character. Players who have reached adventure rank 20 or higher can receive it during version 2.1 on PlayStation or during version 2.2 on all platforms. We remember that cross-save is now available, so we can transfer our game from PC, iOS or Android to PS4 / PS5 to enjoy Aloy and other news quickly and efficiently.

Rapper Soulja Boy says he got an iPhone from Steve Jobs...

Maribel Verdú to be Ezra Miller’s mom in Flash