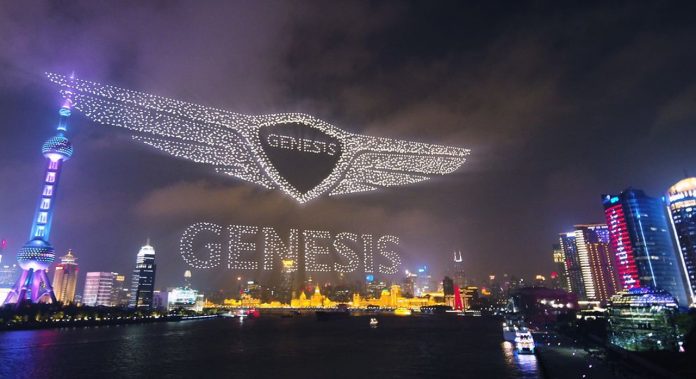 Drone shows have always been a good choice for companies that want to attract people’s attention. Genesis knows this very well. The company, which organized a launch for the entrance to the Shanghai market, made a name for itself with an impressive air show.

The automobile brand owned by the Hyundai company surprised the people of Shanghai with thousands of drones. Having entered China with the sparkling brand logo appearing in the sky, the company not only offered a visual feast. It also holds the Guinness World Record title in the field of Unmanned Aerial Vehicles. Thus, he proved his strength and creativity to everyone.

In 2018, this record was owned by the Intel company, with 2,66 drones flying over Folsom, California. In 2020, 2 thousand 200 drones took over the record by flying in Russia. In the same year, Shenzhen Damoda Intelligent Control Technology Co., Ltd. became the new holder of the record. But on March 29, Genesis used 3,281 drones to advertise on Shanghai. It has greatly opened the difference.

The impressive show of the company, which lasted about 1 minute, is as follows:

The drone show started with the title The Genesis of Genesis, in line with the company’s story in the Chinese market. In addition, stylish designs such as the Hyundai logo and car silhouette also captivated people. However, the main attraction of the show was the drawings of the brand’s popular models, the G80 and GV80, created from drones.

Genesis invites Chinese consumers to recognize the brand’s spirit of defiance and cross-border. The company is not only selling its new cars in the Chinese market; it also aims to make an inspiring experience for everyone.

How did you find this delightful drone show? Don’t forget to share your ideas with us.