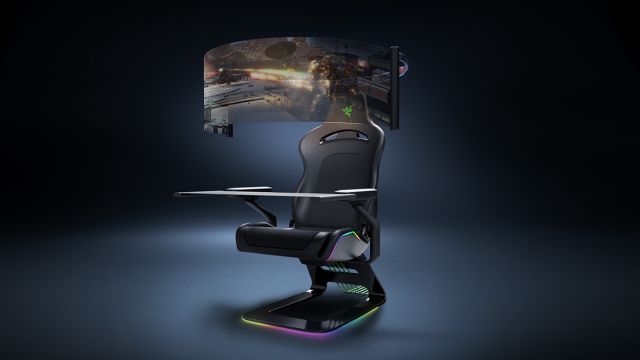 Razer presents Project Brooklyn, its gaming armchair concept that transforms the conventional chair into “a complete entertainment station”. Its main feature is obvious, a 60 ”full surround OLED screen that unfolds from the back after activating it with a single button. When not in use, it folds up as part of the spine. All the wiring falls from it to the bottom.

Once seated in front of the screen, your peripheral vision is enveloped in it. Razer explains in a press release that the design has been inspired by the Iskur model, from the same manufacturer. “Project Brooklyn takes a step forward with several points of contact for the user, connecting the gaming chair to the screen and to its more functional components, such as the armrest”, they narrate. You can see it in motion in the header of this news.

Regarding the ergonomics of the seat, it uses “high-density foam” cushions that support the player’s body. The stitched seat back is built on top of a carbon fiber body. On the other hand, the armrests are adjustable to adjust to your type of gaming experience, whether you play with a keyboard and mouse or with a controller. Each half can be folded when not in use.

To increase the immersion, the company speaks of “Razer HyperSense technology”, sensors around the frame of the chair that vibrate under the effect of the elements that appear on the screen. The examples they put are “jumping into the water or landing on a platform”, as if it were the vibration of a controller in the hands, only that it was all over your back. It also uses Razer Chroma RGB lighting on the exterior parts of the frame. “Project Brooklyn is an exciting concept built on the true essence of a fully immersive gaming station. Its haptic feedback, graphics, and overall functional design with attention to ergonomics will provide a unique gaming experience, ”says Min Liang-Tan, Razer CEO.

At the moment, no release date or price has been disclosed. Being a concept, it is to be expected that some elements will change as your development and research continues.