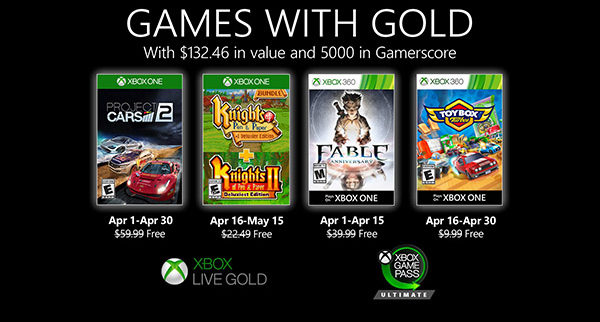 Microsoft announced the games that players with Xbox Live Gold membership can play for free in April. Let’s take a closer look at the games announced by Microsoft.

The free games of April have been announced, which Xbox Live Gold users are eagerly awaiting. Members can have 4 games free this month, just like every month.

Two of the upcoming games in April will be free for Xbox One consoles, while the other 2 will be free for both Xbox One and Xbox 360 users, with backward compatibility. Let’s take a closer look at the games that Xbox Gold Live members can play for free throughout April, without further ado.

1. Project Cars 2 (Xbox One: April 1 / April 30)
For Project Cars 2, launched in the autumn of 2017, we can say that it is a kind of racing simulation game as many know. The details and impressive graphics included in the game have managed to win the admiration of the players so far.

2. Knights of Pen and Paper Bundle (Xbox One: April 16 / May 15)
Offering a high level of role-playing experience, this RPG-style game contains all kinds of action items from monsters to traps. Knights of Pen and Paper Bundle, which should be watched by those who love retro games, will be free for Xbox Live Gold members between April 16 and May 15.

3. Fable Anniversary (Xbox One, Xbox 360: April 1 / May 15)
Published after 10 years by Lionhead Studios, Fable Anniversary is known as an overhauled version of the original Fable series. This game, which scored lower than the authorities compared to the original game, still managed to satisfy many players who liked nostalgic productions.

4. Toybox Turbos (Xbox One, Xbox 360: April 16 / April 30)
In Toybox Turbos, developed and published by Codemasters, you can collect many different vehicles and customize them with mines, machine guns and reinforcements, and race on different tracks. Toybox Turbos, released at the end of 2014 and can be considered relatively old, will have free access for both Xbox One and Xbox 360 Live Gold members from April 16 to April 30.

Rosalía reveals the name and cover of TKN, her …

Ghost of Tsushima; sales higher than expected by Sony