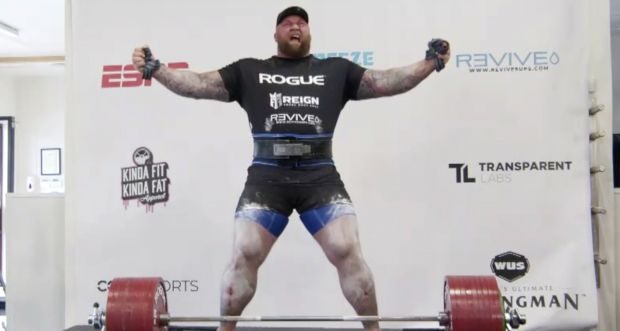 Icelandic actor and athlete Hafthor Björnsson, known for the character of “The Mountain” Clegane, portrayed in the legendary series Game of Thrones, set a new world record by lifting 501 kilos on deadlift this weekend.

Icelandic actor and athlete Hafthor Björnsson, a name that Game of Thrones viewers will get to know closely, has achieved an incredible success. Bringing the character of “The Mountain” Clegane to the eight-season iconic series, 31-year-old Björnsson broke a new world record by lifting 501 kilos on deadlift this weekend. This success of the Icelandic name was broadcast live by ESPN.

The Icelandic actor and athlete who managed to surpass Eddie Hall, who lifted 500 kilograms in 2016, made headlines all over the world with this incredible show of strength. The 2.06-high Björnsson also triumphed in the ‘World’s Strongest Man’ competition held in the Philippines in May 2018. The 31-year-old Icelandic, who won the Arnold Strongman Classic and Europe’s Most Powerful Man competitions in the same year, was the first to achieve this in the same calendar year.

Björnsson, also a former professional basketball player, started his acting career with the epic drama Game of Thrones from the David Benioff and DB Weiss duo. For eight seasons in the iconic series, Gregor Clegane played a role in productions such as Hamlet Pheroun, Zone 261 and Kickboxer: Retaliation, as well as Game of Thrones, which brought the character of The Mountain to life.

Why did Kanye West miss testimony in the divorce case with...