Home Celebrity Game of Thrones: an error on the marriage of Daenerys and Drogo... 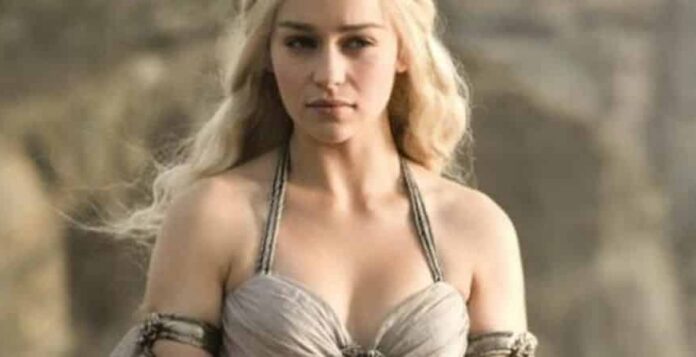 It’s been a year since Game of Thrones ended. Still, fans have noticed an icoherence in Daenerys’ marriage.

Game of Thrones fans got to see the finale almost a year ago. However, fans have noticed an error on the marriage of Daenerys and Khal Drogo. Please note that the article contains spoilers.

It’s been a year since the Game of Thrones series ended and fans are slowly recovering from the grand finale. It must be said that this one marked the spirits and it was not unanimous with the fans.

During the series, fans could see very beautiful couples forming and even some marriages. Thus, everyone fell in love with Daenerys and Khal Drogo. As a reminder, the young woman was to marry the Dothraki.

This arranged marriage became a beautiful romance and it marked the first season of Game of Thrones. In addition, everyone remembers the union between the two characters.

Khal Drogo played by Jason Momoa and Daenerys (Emilia Clarke) have always had a lot of chemistry and he is one of the flagship couples in the series. However, fans have noticed an error in their marriage.

GAME OF THRONES: AN INCOHERENCE ON THE MARRIAGE OF DAENERYS!
It’s been years that fans have seen the first season of Game of Thrones. However, many of them review the episodes and analyze everything. So, they saw a little inconsistency at the wedding of Drogo and the dragon’s mother.

Indeed, in the episode, Jorah gives Daenerys three books on the history of Westeros. In the scene, you can see that Emilia Clarke has the backs of the books facing her.

“Sir Jorah has just given Daenerys three books as wedding gifts. As she takes them, her backs are turned to her right side, “said a fan on Reddit.

It seems that there was an error during the editing of the episode. Indeed, fans have noticed that the books are no longer placed the same the second after. “On the next scene, while Jorah informs him that he has served his father, their backs are now turned to his left side,” remarked a fan.

Finally, this inconsistency goes almost unnoticed next to the Starbucks cup from episode 4 of season 8 of Game of Thrones…