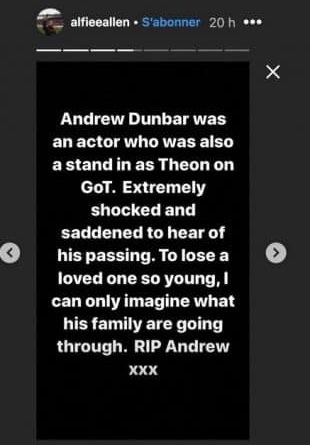 Andrew Dunnbar died at Christmas. He was the understudy of actor Alfie Allen in Game of Thrones. The latter reacted to the news.

A few days after the announcement of the death of actor Andrew Dunbar, one of the actors in Game of Thrones reacted. This is Alfie Allen, who often worked with the young man.

Appearing in Game of Thrones, Andrew Dunbar was best known as the understudy of Theon Greyjoy. He died on Christmas Eve. He was only 30 years old at the time. This sad news surprised all his friends and colleagues.

The exact causes of the actor’s death are still unknown. We just know that he was visiting his family in Northern Ireland, and that he died on December 24. This paralyzed the entire Game of Thrones family. Not only did he often do figuration, he also doubled as Theon Greyjoy when Alfie Allen was away. The latter reacted to the announcement of the death of his colleague. He appeared upset. “I am very shocked and saddened by the news of this death,” he indeed posted on his Instagram account. “Losing someone so young, I can only imagine what the family is going through. ”

GAME OF THRONES IN MOURNING
The young man was full of resources. He thus exercised the profession of DJ in parallel with his extras. Not only did he often double the character played by Alfie Allen, but he also often played in the series. Fans were able to discover it alongside Kit Harrington in the episode dedicated to the “Battle of the Bastards”.

He was therefore a full member of the Game of Thrones cast. Several of his friends and colleagues therefore expressed their sadness at the news of his death. Alfie Allen is not the only one to have posted a message on social networks. The agency that employed Andrew Dunbar posted a message about it. “It was so versatile that we could put it on any project, it was so talented that it always ended up appearing on the screen,” we can read on the Instagram account.