Home Entertainment Game of Thrones: 10 unpopular Opinions about the final season, according to... 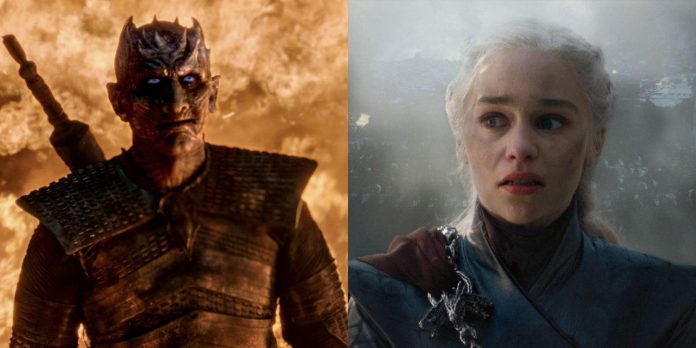 With the Game of Thrones spin-off House of the Dragon set to release on August 21st, the Thrones fanbase has been in fervent debate over whether or not to start building excitement for the show. While it certainly shows promise, some fans are a little too nervous about the state of the franchise, after the disappointing final season.

Still, there are some fans with a more positive outlook. Despite the majority of the internet having been in uproar after Season 8, some enjoyed it or managed to look through the cracks to find something worthwhile. Though their opinions are unpopular, they’re certainly worth looking at.

Shouldn’t Have Had One King

The final season of Game of Thrones ended with Bran Stark claiming the Iron Throne, thanks to Tyrion arguing that he had the best story. But, when Sansa Stark declared Northern independence, some fans were utterly stunned that the other kingdoms didn’t do the same.

“I thought it was dumb that everyone didn’t declare independence as soon as Sansa did,” says Reddit user Calradian_Butterlord. “Especially the Iron Islands and Dorne.” Given that Dorne and the Iron Islands had long yearned for independence, it is somewhat confusing that they didn’t free their kingdoms. Besides, why declare for a Stark king when even the Starks wouldn’t?

The Problem Was The Changes

While many fans lashed out at the showrunners, others couldn’t help but point to the books. “The restraints of adapting books to screens is one of the big things that did Game of Thrones in,” says Reddit user MattSR30. “From day one HBO and D&D cut things from the books to streamline the process, but as things went on they cut more…and more…and more.”

The show did make a lot of changes, like failing to include Lady Stoneheart or Young Griff — the secret Aegon Targaryen. Those changes easily could have added up and made the show more difficult to complete. After all, if the planned ending accounted for those pieces, it’s certainly possible that it contributed to the lackluster conclusion.

When the show revealed that Daenerys was the real villain, most fans found it utterly unbelievable, but some saw the seeds of that storyline ahead of time. “The base concepts and storylines of Season 8 make a lot of sense but the main downside is the execution,” says Reddit ysf02.

Sansa as Queen in the North certainly could have worked better with more build-up, and the Mad Queen Daenerys could have as well. With a few more episodes, even Jon Snow killing her could have worked. So, while the ideas made sense, they still could have used a stronger execution.

The bravest of the Starks, Arya certainly proved capable of anything after her long and lonely journey through Westeros. Still, some fans were unsatisfied with the direction of her arc. “Not anything to do with her character, but I also don’t like that Arya spends the last 2 seasons going around finishing other characters’ story lines,” says LordRahl9 on Reddit.

Given that Arya concluded Jon’s story arc with the Night King, Sansa’s arc with Littlefinger, and even went to conclude Jaime’s arc with Cersei, it’s an understandable critique. Had she been able to tackle villains of her own, it would have been a much more satisfactory story.

The Long Night Was Great

While many fans were dissatisfied with the ending of the Long Night and with Arya Stark killing the Night King, others considered it one of the show’s best battles. “The entire episode makes me feel that there’s no absolute way they’re going to win, because they just keep coming and coming. Then the NK raises the Dead and the feeling of dread just increases from there. Everything about the episode, the effects, the acting, the music, the setting, everything’s good for me,” says TB2331 on Reddit.

Though the White Walker threat is certainly sufficiently set up as an intimidating villain, the harsh lighting and the death of the Night King do somewhat stain the episode. Without those elements, it certainly could have been considered a brilliant fight.

Gendry Should Have Been King

Given how much uproar the decision to make Bran the king has driven, it makes sense that fans would look at alternate options. But one character that Reddit believed deserved the throne is certainly surprising. “I can’t believe that none of the characters (not even Arya) advocated for Gendry due to his royal blood,” says Redditor DanceWithMeJonSnow.

After being legitimized by Daenerys, Gendry was the sole son of King Robert, making him a viable heir to the throne. Given his ties to the Baratheons, he also had Targaryen blood, making him a suitable successor for Daenerys. It would make considerable sense if Gendry was allowed to be king, especially given his respect for the smallfolk.

While most fans don’t exactly think Jaime Lannister had the best Game of Thrones character arc, some do like that his arc subverted its expected direction. “It made sense for Jaime to go back to Cersei,” argues Reddit user CaroleBaskinsBurner.

Given that Jaime never really fought his sister and only abandoned her to fight the White Walker threat, he should certainly have been expected to return to her after. Cersei and Jaime never had the falling out that they did in the books, meaning that Jaime was still interested in following through with dying beside the woman he loved. While it’s not satisfying for fans who wanted to see him fully redeem himself, it’s certainly understandable for his character.

Tyrion Lannister was always considered brilliant. Tactically, socially, and politically, he knew how to navigate a situation with charm and grace. But his personality in the final season rubbed some fans the wrong way. “Tyrion became borderline annoying in season 8, he had no moments as charismatic or engaging as before,” complains Redditor Vivid-Explanation431.

Having lost his snark and careful political maneuvering, Tyrion very quickly became a loyal and disappointed stooge. Still, he certainly did have his moments of engaging in politics, such as when he gave up Varys for execution. It was a poor political play since it led to the destruction of King’s Landing, but it was still entertaining.

Daenerys’ Turn Could Have Worked

The moment that Daenerys Targaryen became the true villain of the series was met with immediate disdain. But some fans thought it could have been done well. “She was always the mad queen, but they didn’t build up the spiral enough. If the show had lasted another season or 2, I think the ending would have been totally fine,” says kailaaa_marieee on Reddit.

Given that Daenerys has always been one to burn her enemies alive at the slightest provocation, it’s understandable that fans would feel that way. Still, she was often doing it to horribly guilty people who were willing to torment their fellow humans. Torching innocent civilians wasn’t exactly a move anyone could have seen Daenerys taking.

It Gets Better After Rewatching

After the final season, many fans swore to never watch the show again. Others took another route and rewatched the series. They found it better on a second watch. “I think one of the big issues was the long waits between seasons, and having to wait a whole week for the next episode during the seasons, just for the last 2 seasons to be shorter than the rest of the series, making it feel like a super rushed ending,” says Redditor verbleabuse97.

It does make sense that some of the controversies could have been eased by rewatching the series. After all, arcs like Jaime or Bran’s are more comprehensible on a second review. Even Tyrion’s personality shift becomes more relatable after seeing his slow decline after his father’s death.

Fallout Power Armor is one of the most distinctive features of...