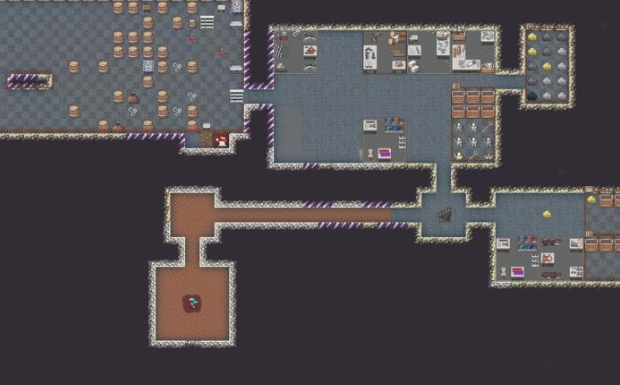 Dwarf Fortress has finally been released, and an updated version of the role-playing simulator game quickly topped the Steam charts.

Development of Dwarf Fortress began in 2003, and, according to the Steam list, “there is no end in sight to the live project.”

“The deepest and most complex simulation of the world ever created. The legendary Dwarf Fortress is now on Steam. Build a fortress and try to help your dwarves survive in a deeply generated world,” the listing continues.

An updated version of the game was released yesterday (December 6) along with the Steam release, including new pixel graphics, tutorials, new music and sound effects for the game, previously used only for ASCII graphics.

Dwarf Fortress has already received an “extremely positive” rating on Steam: more than 4,700 positive reviews and only 106 negative ones.

And on social networks, several developers used the Steam release to decorate the iconic Dwarf Fortress with their colors.

“Congratulations on the launch! This game inspired Terraria in many ways — it’s fair to say that without Dwarf Fortress, there might not have been Terraria,” says the official Terraria Twitter account. “We can’t wait to delve into the latest version of a truly classic game for all time.”

“Congratulations! I can’t wait for everyone to be able to play this legendary game and endlessly lose,” the team Among Us continued.

The developers of Dead By Daylight added: Congratulations! Is there a chance that your Fortress will accept Dwarves? I ask a friend.”

Perhaps the most glorious and influential sim game ever made, and a direct inspiration for my career as an indie dev. Congratulations @Bay12Games @KitfoxGames! https://t.co/wNPSbkg3lq

Congratulations! Without Dwarf Fortress there'd never have been a Prison Architect and I'd have never got to work on the console version of Escape Mode, which is probably the most creative fun I've had working on a game EVER!

Happy Dorf Launch everyone! It's been a long road but we are finally here! I can't begin to express how thankful I am for being a part of such a monumental launch. We are just getting started 💪 https://t.co/TmLLmImZ4H

Developer Bay 12 Games has also committed to supporting the free version of the game along with the new paid version.

However, the updated version does not include all the features of Dwarf Fortress at launch, as Bay 12 Games plans to add features such as Adventure and Arena modes later. Publisher Kitfox Games has also posted a release plan on its website.

In other news, a Warzone 2.0 professional accused of fraud tried to prove his innocence by showing off his monitor, only to accidentally confirm the use of a cheat menu.

The Witcher 3 Rides And Fights Geralt In His First Steam...