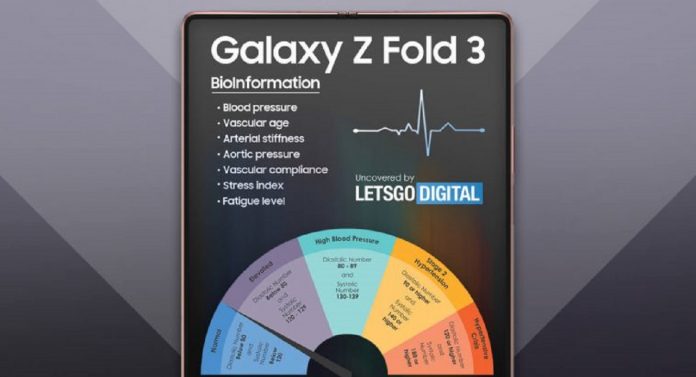 Galaxy Z Fold 3 received new patent. In recent years, smartphone manufacturers have begun to bring many health-related functions to their devices. Many models currently on the market have capabilities such as blood and fever measurement. However, Samsung wants to go a little further at this point. Because the new patent obtained by the company reveals that the Galaxy Z Fold 3 model will have advanced features in terms of health.

According to the report of the LetsGoDigital website, Samsung; Got a new patent for Galaxy Z Fold 3 that can measure blood pressure. This patent shows that the device will come with biometric sensors under the screen.

Patent filed in April 2020; It was submitted to the US Trademark Office under the title of “Biological Prediction Using Foldable Electronic Devices”. After that, it was approved on 25 March 2021.

Samsung will place biometric sensors under the screen to measure blood pressure. Then the user will be able to measure by placing his index finger on the screen.

The South Korean manufacturer will not limit this feature to blood pressure measurement alone. Same time; It can be used in vascular age, aortic pressure waveform and fatigue index.

In addition, Samsung, to improve the accuracy of the measurement; It will also take into account the user’s gender, weight and BMI index and the temperature of the environment. Of course, the details about this are not fully known.

Z Fold 3 will come with an under-screen camera

The Galaxy Z Fold 3 model, which Samsung will launch in the coming days, will be the company’s first under-screen camera phone. In addition, the device will come with a 7.6 inch internal screen. However, this screen will be smaller than the previous Galaxy Z Fold 2.

Samsung, on the other hand, won’t just make the screen smaller. It will also reduce the battery capacity accordingly. The company’s new generation foldable phone will come with a 4,380 mAh battery. In Galaxy Z Fold 2, this capacity was 4,500 mAh.

In terms of design, there will be no visible difference. Galaxy Z Fold 3 will continue the look of the previous generation. However, the device will come with a configuration similar to the Galaxy S21 in the camera module.