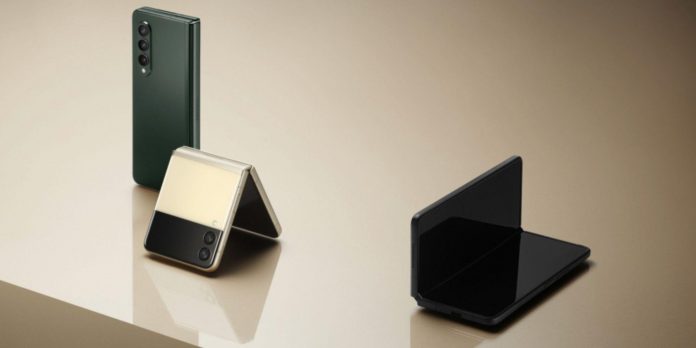 Samsung Galaxy Z Flip 4 and Galaxy Z Fold 4 are due to be released this year, and although no official information has been received from the South Korean company, several leaks have told a lot about smartphones. Samsung released the first version of Fold in September 2019 and Flip in February 2020, which caused a mixed reaction. Although they were praised for innovation, they had problems with durability. However, each generation increases the service life, and users hope that this trend will continue.

While Samsung remains the leader in the US in folding phones, many other companies are releasing their own versions. The tech giant has more competitors in the global market than in the US, including Huawei’s Mate Xs and P50 Pocket, as well as Xiaomi’s Mi Mix Fold. In the US, Motorola will also release the third generation Razr this year, although it is not expected to surpass Samsung’s foldable devices.

According to a recent leak by John Prosser, the Samsung Galaxy Unpacked event will take place on August 10, 2022, and that’s when the Galaxy Z Flip 4 and Fold 4 will be announced. Then they will arrive on the shelves on August 26. However, Samsung has not confirmed anything yet. Last year, Flip 3 and Fold 3 smartphones were announced and released in August. A year earlier, The Fold 2 had similar deadlines: the announcement took place in August, and the release date was in September. Despite the fact that Samsung is not making an official announcement about the fourth generation of these phones, there are many leaks so that users can get an idea of what will be released.

Galaxy Z Flip 4 and Z Fold 4 Design: Will there be an update?

The biggest question with foldable phones is whether their durability will be better, but until they hit the market, all users can see is the design itself. As for the Galaxy Z Flip 4, there are not so many changes. According to rumors, the design looks almost the same as its predecessor. The fingerprint scanner is still on the side, the ports and microphone are on the bottom, and the volume control button is on the right. The main display will also remain at 6.7 inches. However, it looks like the display on the cover may get bigger. It could be 2.1 inches, which is slightly larger than the 1.9 inches of the Z Flip 3. Although the hole in the center remains the same, renderings show that the faceplates will be smaller. Unfortunately, there is a noticeable gap in the closed state, but the frame next to the loop is thinner, plus the crease of the screen is less pronounced. One of the renderers received by the insider is colored blue, which means that users will be able to get a phone in this color. It will be in gold, gray, light blue and light purple colors, but there may be more colors.

The Galaxy Z Fold 4, on the other hand, sounds like Samsung will make design changes. Whether this is an update or not depends on the user. The measurements will be different. When the Fold 4 render was placed next to the Fold 3, the new phone was slightly wider and shorter than its predecessor, making it more square. According to rumors, the dimensions in the expanded form will be 155 x 130 x 7.1 inches. The camera module on the back is also slightly different, with three separate lenses protruding.

Galaxy Z Fold 4 will see improvements for all its cameras. The main camera will be enlarged to 50 megapixels compared to the previous 12. The selfie camera has also increased to 16 megapixels. In addition, the phone will have a 12-megapixel ultra-wide-angle lens and a 12-megapixel telephoto lens with triple optical zoom.

Although there were rumors that the Flip 4 would get better cameras, it looks like it will be the same as its predecessor. The only difference will be two 12-megapixel cameras instead of one. The selfie camera will become 10-megapixel again.

Both Flip and Fold are getting a major update under the hood. Smartphones will run on the new Qualcomm Snapdragon 8+ Gen 1 processor. It will be produced using TSMC’s 4-nanometer process, so the phones will have higher efficiency and performance, as well as less heat. However, the technology of the external display will be the same as that of its predecessors. The Flip 4 will have a 2.1-inch sAMOLED screen, and the Fold 4 will have a 6.2-inch HD+ AMOLED with a frequency of 120 Hz. Unfortunately, the resolution of Flip 4 is still unknown. Inside, Flip 4 will have a 6.7-inch sAMOLED FHD+ 120 Hz screen, and Fold 4 will get a 7.6-inch AMOLED QXGA+ 120 Hz. Nothing changes in the memory and storage department.

PS5: Sony Confirms That It Will Add VRR “In The Coming...