As much as Samsung tries to hide, the launch of the Galaxy S21 family will actually be brought forward to January next year. This is because the amount of leaks involving the devices has grown substantially in recent weeks.

Today (17), the well-known benchmark platform Geekbench confirmed more details of the Galaxy S21. This time, we have the device’s score with the new Snapdragon 875 processor, which should only be announced in early December.

See below that the new top of the line won 1120 points in the single-core test and 3319 in the multi-core. In general, the SM-G996U model has a better performance than the Exynos processor variant, which achieved 1038 and 3060 points, respectively. 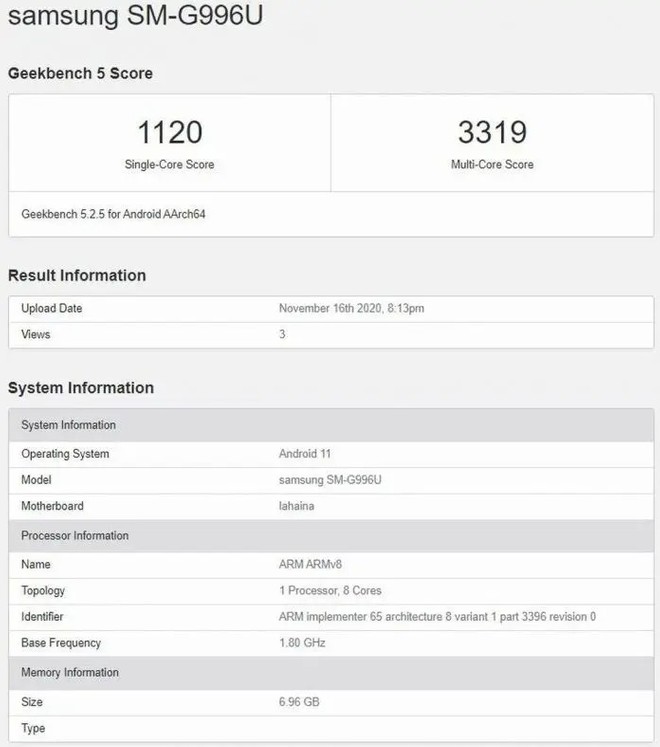 Another important detail is that the most basic variant of the Galaxy S21 should come out of the box with 8 GB of RAM and Android 11, that is, the same configuration found in the Exynos model. For now, Samsung is still in complete silence about the possible launch date of the new flagships.

Anyway, the leak season has already confirmed that the Galaxy S21 should be announced with a 6.7-inch OLED screen with FHD + resolution and a refresh rate of 120 Hz. In addition, the rear should bring three cameras, with the main sensor 12 MP, wide-angle with over 12 MP and 64 MP telephoto.

Finally, to guarantee good autonomy, a battery with 4,800 mAh capacity is also expected, with support for fast charging of 25W. In addition, the device features Android 11 running under the proprietary One UI 3.1 interface.

Why is April Fools Day celebrated?

Streamer denounces scams and fake news about coronavirus on Twitch

Koh-Lanta: the next season will be shot in France!

Netflix is ​​going to have a shortage of new movies and...

This character is no longer in the series

Deathloop director on DualSense: “Feel the weapons in your hands”

Seasons and New Pokemon are Coming to Pokemon GO