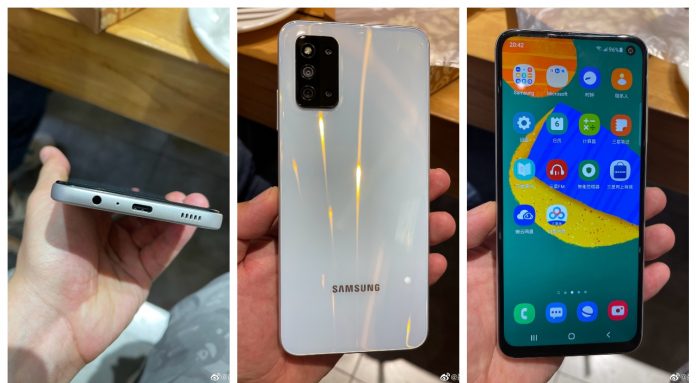 Galaxy F52 5G Was Leaked. Samsung continues to work unabated for its new smartphones. While the Korean manufacturer is preparing foldable phones on the one hand, on the other hand, it aims to increase the variety of popular mid-segment phones. There were reports that the company was working on the Galaxy F52 5G model recently. Today, the design of the device has surfaced once again with the live visuals leaked.

Galaxy F52 5G, which is expected to be the new member of the middle segment; It is shown as one of the most selling model phones of the company with its price and technical features. While almost all the features of the phone are seen in various channels, this time, live images of the device were leaked before the launch.

Judging by the leaked images, the Galaxy F52 5G will have a strangely different front end than the current Galaxy models. While other devices come with a perforated screen placed in the center, this hole will be located on the right of the center in the Galaxy F52 5G. The back design of the phone matches the visuals that were previously leaked on the TENNA site. Accordingly, the rear camera module of the Galaxy F52 5Gwill host a quad lens in the upper left corner. In addition, there will be an LED flash next to this module.

In terms of camera resolutions, there will be a 64 Megapixel main camera behind the Galaxy F52 5G. On the front, there will be a 16 Megapixel selfie camera. However, there is currently no exact information about other auxiliary sensors.

If we talk about the screen features Galaxy F52 5G; It will be equipped with an LCD panel with a resolution of 1080 pixels and a size of 6.57 inches. As a processor, the device will get its power from the Snapdragon 750G chipset. In addition to this; It will also support it with 8 GB of RAM and 128 GB of internal memory.

This mid-range phone was approved for battery capacity on China’s 3C certification site a few weeks ago. In this context, in Samsung’s new device; It will include a 4,350 mAh battery that supports 25W fast charging. In addition, the phone will come out of the box directly with the Android 11 operating system.

There is also some information about the price. According to a report shared on China’s social network Weibo, Samsung’s new mid-range phone will have a price of $ 310. However, it is said that this price will remain valid in China and will have a higher cost for Europe.