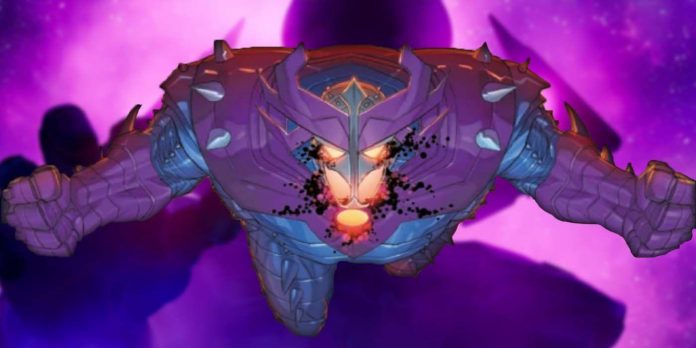 Warning! Spoilers for Fantastic Four #45 are ahead!
Given Galactus’ long-standing status as one of Marvel Comics’ most powerful characters, it’s scary to imagine the World Eater getting even stronger, but his form of Destruction clearly rewrites his limits. This version of the classic nemesis of the Fantastic Four proves that even the combined might of many of the greatest defenders of the cosmos is not enough, as they struggle to hold on when the events of the War of Reckoning pit them against this new Galactus-Destroyer Combination.
This final form was created in Fantastic Four #44 by Dan Slott, Rachel Stott Davide Tinto and Andrea Di Vito. It is formed as part of a frenzied emergency response to the threat posed by Reckoning, a group of alien warlords simultaneously trying to take revenge on the Observers and put an end to the entire Multiverse through the Top of All Reality. Knowing that circumstances have reached terrible proportions, the Silver Surfer resurrects Galactus as a weapon, joining other former Messengers of the World Eater in this goal. However, the process takes an unexpected turn, allowing Galactus to connect with the Destroyer of Asgard. However, the Silver Surfer still leads him to the Top of All Reality to gain another power boost leading to his form of Destruction. This new Glactus Destroyer is a powerful weapon of the heroes in their last attempt to stop the Reckoning.
Related: Galactus’ Ultimate Weapon Is Finally Explained in a Huge Change in Marvel Lore
The first pages of Fantastic Four #45 by Slot, Stott, Tinto and Di Vito give an idea of how powerful the new form of Galactus is, showing that it withstands the attack of several of Marvel’s most powerful characters. Although other powerful heroes join the battle, it is his ability to restrain members of Marvel’s most powerful team, the Annihilators, that is particularly indicative of his might. The Annihilators are positioned as an enhanced, destructive version of what the Guardians of the Galaxy were supposed to become. The team consists of the strongest strikers of the cosmos, including Beta Ray Bill, Silver Surfer, Ronan the Accuser, Gladiator and Quasar. They are the result of the Star Lord’s belief that the most destructive forces in the universe must be gathered to protect all creation.
The opening scene of the release indicates that Galactus’ form of Destruction may return to its old habits, as it looks like it is about to devour the Observers’ home planet, T-37X. Annihilator Beta members Ray Bill and Gladiator join the fight, and the Silver Surfer is not far from the scene. As long as the Surfer is ready to break in, it may be ineffective, since this is Galactus, whose powers can be immeasurable.
Galactus’ ability to ignore the efforts of the most powerful heroes in the universe, including two or three members of the strongest Marvel team, as well as Thor and Nova, shows that his maximum levels are enough to minimize even the strongest attacks. He does not suffer from their combined efforts, which bounce off his armor. While it was created to help the heroes save the universe, Fantastic Four #45 sees Galactus’ form of Destruction spiraling out of control and becoming a threat in its own right, signaling that the entire universe is facing a new crisis.

The 5 Most Creative Weapons from Horror Movies