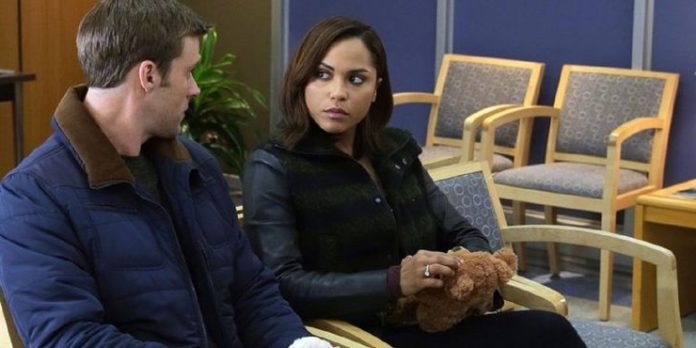 The popular Chicago Fire series is preparing to continue with the season 9 premiere after a brief hiatus, but it has been suggesting that Matthew Casey and Sylvie Brett establish their relationship. But, not without mentioning Gabby Dawson so much.

In the last episode of season 9 of Chicago Fire, we saw how Casey and Brett, they entered into passion with many kisses in the sofa of their house, soon to be interrupted with the word, Gabby.

Then Brett, asking Casey an important question about her old relationship with Gabby Dawson, in which she asked him: If her ex-wife came back and asked him to go with her, would she leave?

Unfortunately for the potential partner, Casey didn’t really have an answer for Brett beyond “I don’t know.” The paramedic then thanked him for being honest and politely asked him to leave her.

Now, Brett’s question and Casey’s answer could be suggesting an unexpected return for actress Monica Raymund and her character from Gabby Dawson.

With today’s premiere of Chicago Fire Season 9, Episode 3, it will be possible to find out a little more if there is a chance to see this great old character back.

The question from fans of the drama is, if the actress returns to the series again, what would her unexpected entrance to the Chicago Fire show be like.

SBS IS INVESTIGATED FOR NEGLIGENCE AFTER RED VELVET’S WENDY ACCIDENT