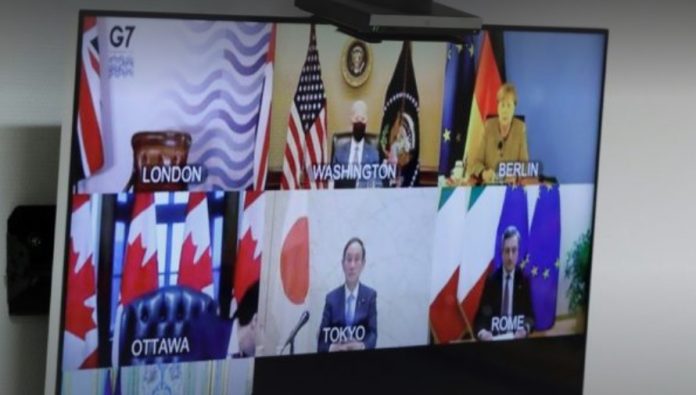 At their first videoconference meeting with Joe Biden, G7 leaders pledged on Friday (19) to return to multilateralism, shaken under Donald Trump’s government, and promised to share covid-19 vaccines with the poorest countries. .

A month after arriving at the White House with the promise of diplomacy, the Democrat attended his first international meetings.

First, he participated in a video conference with the leaders of France, the United Kingdom, Germany, Italy, Japan, Canada and the European Union, whose main subject was the response to the pandemic, which has left more than 2.4 million dead worldwide. world.

He then spoke at the Munich security conference, the first time that an American president attended this annual meeting of heads of state, diplomats and security experts.

“I am sending a clear message to the world. The United States is back. The transatlantic alliance is back, ”said the 46th president of the United States at the White House at this second meeting.

In a note, the G7 leaders recognized this new state of affairs, stating that they intend to make 2021 “a turning point for multilateralism”, applying it first to the pandemic.

“Once again, multilateralism will have more options within the G7,” said German Chancellor Angela Merkel.

They announced that they would double their collective support for the anti-HIV vaccine with help of up to $ 7.5 billion, especially through the UN Covax program, led by the World Health Organization (WHO), which Washington has just reinstated after leaving. of Trump.

In addition to the United States, the European Union doubled its contribution to 1 billion euros (1.21 billion dollars).

Germany has announced that it will contribute an additional 1.5 billion euros (about $ 1.8 billion) to the global fight against the pandemic.

The program aims to provide coronavirus vaccines this year to 20% of the population in nearly 200 participating countries and territories, but above all it includes a financing mechanism that allows 92 low- and middle-income economies to access doses.

Attacks against Russia and China

The great powers have started, with greater or lesser success, mass vaccination campaigns against the coronavirus, but the disadvantaged countries remain on the sidelines for the time being.

Rich countries asked for large quantities of doses without knowing whether these vaccines would be effective, but given the number of drugs that work, they ended up having hundreds of millions of doses left.

“This is a global pandemic and it does not make sense for one country to overlap with others, we have to move forward together,” said British Prime Minister Boris Johnson, whose country holds the rotating presidency of the G7, at the opening of the meeting.

“We want to make sure that we distribute our vaccines at cost prices around the world and that everyone is vaccinated,” he added.

The British leader has already promised to redistribute most of his surplus through Covax.

But his government, which wants to end its third confinement, wants to prioritize its own citizens.

French President Emmanuel Macron on Friday proposed to European countries and the United States to donate 13 million doses of vaccines to Africa “as soon as possible”.

This is the first G7 meeting since April 2020, when the health situation forced the cancellation of the summit that Trump should organize.

His successor, in his first speeches and telephone conversations, has already drawn the new line of American diplomacy, with tougher speeches against Russia by Vladimir Putin, the desire to resume an agreement on the Iranian nuclear program and commitments to the allies.

In his speech at the Munich conference, Biden confirmed this evolution, accused Russia of “attacking our democracies”, considered that the world must do more for the climate and said he was determined to “win back” Europe’s confidence.

Following in the footsteps of his predecessor, he called for action to combat “economic abuses by the Chinese government”, which undermine “the foundations of the international economic system”.

9 curiosities of The Heirs that will make you relive this...