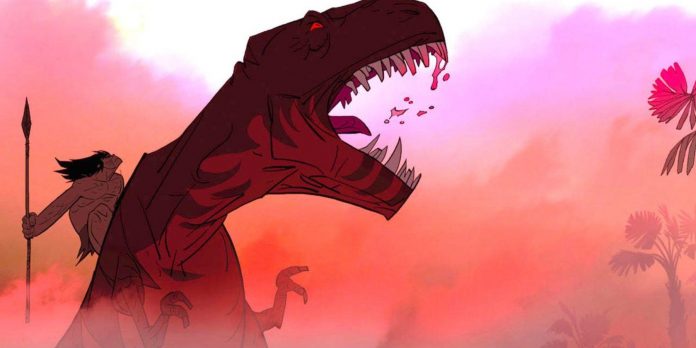 Primal premiered in October 2019 and is currently in its second season. This is the last work of Gennady Tartakovsky, known for the films “Samurai Jack”, “Dexter’s Laboratory”, “Hotel Transylvania” and “Star Wars: Clone Wars”. “Primeval” is Tartakovsky’s darkest work, telling the story of a Neanderthal and a dinosaur exploring a cruel and ruthless prehistoric world.

The show won the Annie Awards and Primetime Emmy Awards for incredible visual storytelling without dialogue. Interestingly, some of the best video games used the same formula as Primal, such as Ico, Shadow of the Colossus and Journey. The current popularity of Primal and the history of games with similar narrative elements are a sign that more games may want to jump into the wagon of quiet stories with strong visual effects.

How Primal Storytelling Techniques Are Perfect for Video Games

Primal follows the “show, not tell” rule to the limit. Spear, the main character, has not said a word in two seasons of the series; instead, most of the information about the character is conveyed through expressions and body language. Since many of the characters are dinosaurs and prehistoric animals, this choice of visual storytelling is very important. Even when more people meet, there is a huge language barrier, and neither the main character (nor the audience) usually understand what it is about.

Video games succeeded in this formula before Primal. In fact, video games are known for silent protagonists, as they were used as a way for the gamer to project himself more onto the character. Primal works in much the same way with Spear, who can’t tell the audience what he thinks or feels, so they decide based on his actions.

So many video games already do a lot of things that serve Primal, but there are some elements that make Primal special. He takes a quiet story and transports it into a ruthless world with a protagonist full of emotions. It’s incredibly reactive, which is an element that many silent video games tend to overlook so that the player can project himself more. In Elden Ring, for example, the silent protagonist is always insensitive in the interests of the player’s projection.

Projection is part of the magic of video games. Television and books cannot imitate the same main character. However, not every video game has a projection. However, in games where there is no projection, there are a lot of dialogues. The main character can talk to himself a lot, and he has a choice of voice acting or written dialogue. That’s where the missing part comes in: video games should look at Primal as a way to have a reactive emotional protagonist while maintaining a quiet and visually oriented story.

The games closest to Primal are the Team Ico games, which are widely considered to be among the greatest video games of all time. These are titles that back in 2001 argued in favor of the fact that video games are art. Although they are not violent or prehistoric like Primal, they reflect the same visual narrative without sacrificing the emotions and reactions of the characters.

Unfortunately, video games may have limitations, since the main character’s face is not always visible and, therefore, does not show his reaction and emotions. Usually players see the back of the character they control. This is where creating a game that mimics Primal’s raw emotions and actions can be challenging, but not impossible. Games always find new ways to tell a story. Since many developers and publishers probably grew up on Tartakovsky’s work, the gaming industry can really pay attention to Primal and what a game like Primal might look like.

The Monkees’ songwriter was “crushed” by fans after the band performed...

What kind of DC comics supervillain would you be based on...