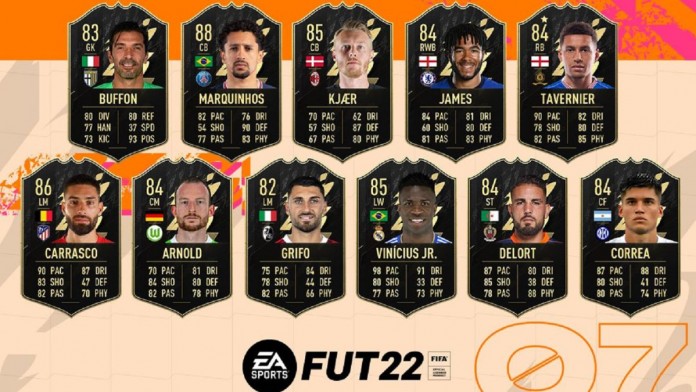 FIFA 22 publishes the Team of the Week (TOTW) 7, now available during the opening of packs for a limited time and on the transfer market. FIFA 22 has shared the seventh Team of the Week. The well-known TOTW selects the best footballers of the last day in the licensed leagues in the game. Players are now available as part of a limited-time booster opening or via the transfer market.

Team of the Week 7 highlights

Two representatives of LaLiga Santander sneak into the starting eleven. On the one hand, Carrasco, who raises his average to 86 points; on the other, Vinícius Jr, who updates his pace statistics to 98 points no less. Among the reserves we can find Lozano, the key striker of Cádiz FC.

The highest rated footballer in this batch is Marquinhos, the defender of Paris Saint Germain. With 88 on average he becomes one of the best center-backs in the game. Another interesting article falls on Kjaer, who receives a defensive boost up to 87 points. If you are looking to strengthen your team behind, this selection of the week covers your needs.

The Witcher: Nightmare Of The Wolf – Film Gets Release Date...