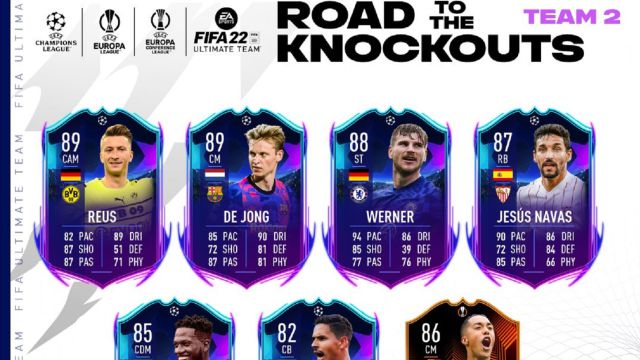 FIFA 22 confirms the second team players of the Road to the Knockouts promotion, now available in packs and on the transfer market. FIFA 22 reveals the second team to participate in the Road to the Knockouts promotion. Those chosen become part of the opening of envelopes for a limited time and through the transfer market. The event celebrates the main UEFA competitions. Champions League, Europa League and Conference League.

Road to the Knockouts 2nd Team

Among those chosen there are only two LaLiga players. The best rated is Frankie De Jong, who shares an average of 89 points with Reus, the other player with the highest score. The second ambassador for our competition is Jesús Navas, who receives a sensible boost of pace and dribbling. His improvement leads him to have an 87 on average. Almost nothing.

Then we leave you with the recently announced.

Tatiana Maslany: “The Hulk Woman is the antithesis” of most superhero...